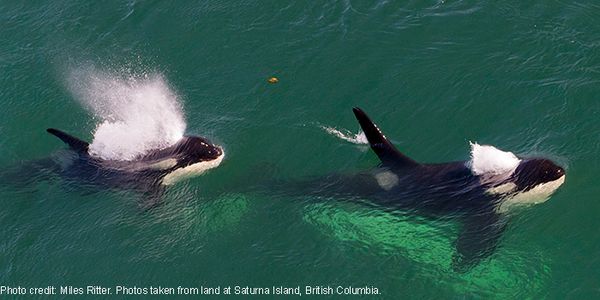 Join us to help stabilize the climate and save marine wildlife!

You've heard the news: the climate crisis is here.

Wildfires, smoky skies and 656,501 hectares burned in B.C. this summer. The entire village of Lytton burned to the ground, one day after reaching 49.6 degrees, the all-time heat record in Canada. This fall, roads and communities across the province have been devastated by torrential rains and historic flooding, as extreme weather events continue.

And climate change doesn't just affect us on land — billions of sea creatures died in one week as a direct result of the heat dome.

Glaciers are rapidly melting, snowpack is lessened, and rivers and streams are hotter due to rising temperatures. Warmer water and lower river and stream flows mean wild salmon can no longer reproduce at the rate they did before. And without salmon, whales and other marine wildlife have nothing to eat.

Over the last decade, the endangered Southern Resident orca has experienced the death of several individuals and many unsuccessful pregnancies. Studies of the orcas' physical condition using drones showed that in some years the orcas return to the Salish Sea appearing thin and suffering from malnutrition. The three pods used to regularly come together in a "super pod" to feed, but due to lack of Chinook salmon, the pods are fragmenting.

To protect habitat for the Southern Residents, one action we must take is to stop fossil fuel expansion and phase out its use. Every tonne of emissions we are able to reduce will prevent the temperature from going higher.

Care2
Join us to help stabilize the climate and save marine wildlife!
PARTAGERTWEET