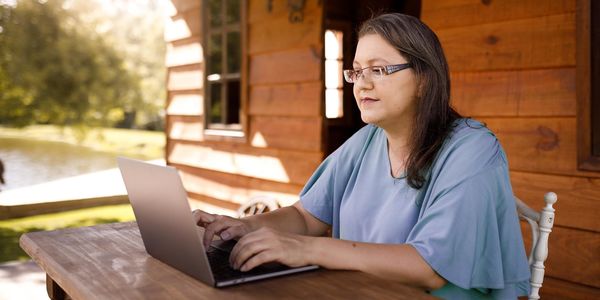 Nearly One in Four Rural Americans Doesn't Have Access to the Internet at Home. Congress Must Change That!

In 2022, most of us are highly dependent on broadband access. The internet is quite literally essential to all aspects of modern life: perhaps most obviously in terms of work and education, but also in how we socialize, entertain ourselves, access important information about our health and well-being, and stay informed about what's happening in our country and around the globe. Yet millions of Americans lack even basic broadband access, effectively shutting them out of job opportunities and connection to the rest of the world. It's high time Congress do something about this harmfully unequal access.

In the past few decades, internet access has expanded rapidly, connecting hundreds of millions of Americans to the world wide web and as a result, people and opportunities from around the globe. Yet that expansion has halted in recent years, and rural people are disproportionately affected by these infrastructure issues. Some estimates suggest that a whopping 15 million people living in the United States lack broadband internet, a figure even more shocking when put in the context of other statistics that define the country. For example, the United States is the richest nation in the world by a large margin. It also has the largest GDP. But somehow, the U.S. government can't find the money to fund basic infrastructure necessities for rural communities?

The internet access gap is especially stark among the poorest Americans. And, crucially, increasing broadband access has the potential to dramatically reduce the massive wealth disparity that exists between the nation's highest and lowest income residents. Researchers have found that higher levels of broadband adoptions contribute to higher incomes and lower unemployment – as well as more economic growth overall. On top of that, for those that live in rural communities far from the nearest medical facilities, telehealth access can mean life or death.

For two years now, COVID-19 has reminded us just what a crucial role the internet plays in our lives. During lockdowns, quarantines, and social isolation periods, Americans were forced to continue on working, studying, and accessing their healthcare providers, but now those obligations became primarily virtual. There is no excuse for such widespread disparities in internet access in the 21st century. We must put pressure on Congress to fund internet expansion and quality improvements in rural areas! Sign the petition now if you agree!
signer
PARTAGERpartager sur FacebookTWEETE-MAILINCRUSTER
signer
Voir plus de pétitions:
Vous avez désactivé JavaScript sur votre navigateur. Sans JavaScript, il se peut que notre site Internet ne fonctionne pas correctement.

Care2
Nearly One in Four Rural Americans Doesn't Have Access to the Internet at Home. Congress Must Change That!
PARTAGERTWEET