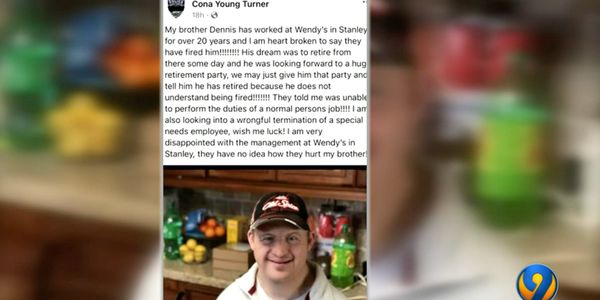 A Wendy's Employee Harassed and Fired a Disabled Worker

A man who spent more than two decades of his life working for Wendy's was the target of ableist language and literally fired for his disability. The North Carolina man, who had worked for the franchise for almost 22 years, was tragically told that he "couldn't do his job like a normal person" and received no notice for his firing. This man was approaching retirement age from Wendy's and will now enter retirement early after enduring vicious harassment. There is no excuse for this kind of treatment anywhere - and it is time the multi-billion dollar company takes action to fix the unacceptable behavior from some of its employees!

Sign now to demand that Wendy's fire the employee who terminated and demeaned this person!

Wendy's claims that this whole incident was an "unfortunate mistake," and has since offered the job back to the man. But when reached for comment, his family said that he would be entering early retirement following the harassment. What kind of work culture would allow this person to be targeted, fired, and insulted after 20 years at an establishment? Clearly offering this man his job back is not enough. Whoever demeaned and terminated this employee must be fired immediately.

Unfortunately, this incident is all too common. Disabled people regularly face discrimination in the workplace, even with the protections guaranteed in landmark legislation such as the Americans with Disabilities Act. In fact, disability claims were the most commonly reported type of discrimination in the workplace in 2020. And when these incidents happen, it is up to employers and companies to take responsibility and make sure that type of horrific harassment will not occur ever again. People of all abilities deserve respect and dignity, and the discriminatory actions of this employee are unacceptable.

Sign the petition now to tell Wendy's: this type of discrimination is unacceptable! The employee who used harmful, disparaging language must be fired immediately!