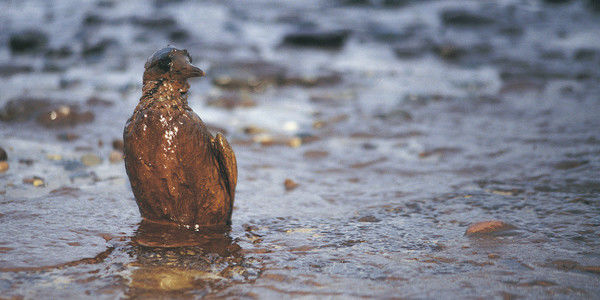 We still don't know how many barrels of oil spilled out during a recent pipeline rupture in Ecuador, polluting multiple acres of a protected Amazonian rainforest area. All we do know so far is that countless wildlife species, as well as the Indigenous communities of Ecuador, are paying the horrible daily costs.

After a few days, oil is already reaching the Coca River, one of the Ecuadorian Amazon's largest. This means the water is undrinkable and unusable. Fish are inedible. And meanwhile, the precious animals of the rainforest are also suffering as their environment is rendered inhabitable and full of poisons.

Sign the petition to demand that the private fossil fuel company OCP Ecuador take full responsibility for providing a thorough cleanup as well as aid to the Indigenous peoples whose lives have been upended!

In late January 2022, a pipeline owned by the private company OCP Ecuador became damaged during a mudslide. This might seem like a freak accident out of their control, but it's far from the first time such a thing has happened to OCP pipelines in the country. Yet OCP has clearly not taken sufficient action to ensure their pipelines are safe and fully protected from such events - because yet again, their equipment has broken, resulting in horror for animals and humans alike.

As Patricia Vargas, who leads the Panduyaku Indigenous community in the Sucumbíos province of Ecuador, summarized: "Once again we have been polluted and we are fighting about it with OCP."

Before effective cleanup operations and repatriation to Indigenous communities can even begin, it's imperative for people to know the scale of the problem. But so far, information about the number of spilled barrels has been kept hush-hush.

Indigenous community groups are demanding the government create and publicize what it intends to do to provide food and water to the people who rely on the Coca River, and to know more about cleanup efforts to contain and remove the deadly pollution. We must stand with them. Sign the petition to add your voice to this call!
Firma la petizione
CONDIVIDIcondividi con gli amici di FacebookTWEETE-MAILINCLUDI
Firma la petizione
Vedi altre petizioni:
JavaScript è disabilitato. Il nostro sito potrebbe non funzionare correttamente.