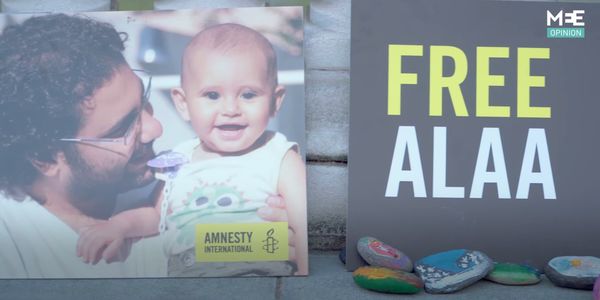 Political activist Alaa Abd el-Fattah has spent the better part of the last 9 years imprisoned. His vocal support of democracy and opposition to the authoritarian rule that Egypt has been under since President Abdel Fattah el-Sisi came to power in 2014 have earned him a life unjustly behind bars, separated from his family – including his 10-year-old son, Khalid.

Now, he is dying – on a hunger strike in protest of his treatment.

Sign the petition now to demand that President el-Sisi and UK Prime Minister Rishi Sunak come to an agreement and save Abd el-Fattah's life!

Even in prison, Abd el-Fattah has used the only thing available to him to continue to advocate for freedom of speech, democracy, and human rights – his own life. For over 200 days, he has been intensely restricting his diet, protesting Egyptian authorities' refusal to grant him British consular access in prison (Abd el-Fattah holds dual citizenship in the UK and Egypt). The United Kingdom's inability to secure his safety, all the while coordinating and cooperating with Egypt in preparation for this year's COP27, is utterly disgraceful.

COP27, an annual international conference to address climate change, is being held in Egypt this year, a deeply ironic juxtaposition to Abd el-Fattah's imprisonment. As United Nations Special Rapporteur on Human Rights and the Environment, David Boyd, aptly put in a tweet, "Freedom of speech is a prerequisite for climate justice!"

Now, COP27 is underway, and Abd el-Fattah timed his hunger strike to escalate accordingly – he has officially stopped drinking water. This means that the UK and Egypt have only days, possibly even hours, to save his life. Family, friends, and advocates describe Abd el-Fattah's situation as incredibly dire – apparently he is just skin and bones. But his continued fight for justice shines an incredible beacon on the atrocities that Egypt is committing – an estimated 60,000 Egyptian political prisoners are imprisoned in the country along with him – and we cannot let his activism be in vain.