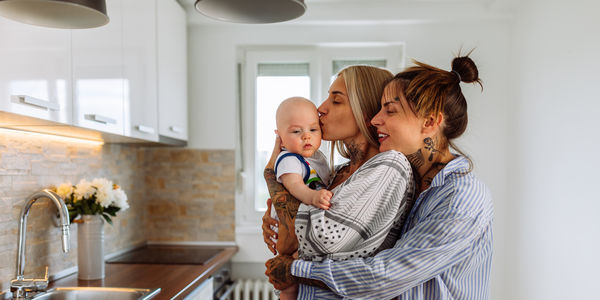 Demand LGBTQ+ Parents Have Equal Adoption Rights As Everyone Else!

In 2022, it is still legal to discriminate in adoption processes based on sexual orientation or gender identity in a whopping *15* states. Yes, you read that right: at a time when Republicans are grossly suggesting adoption can simply replace abortion services (it can't), red states still allow discrimination against parents eager to adopt, simply because they are not straight or not cis. It is time these states join the rest of the country in creating formal protection against discrimination in adoption services.

Sign now to demand all remaining states who have no explicit protection against discrimination in adoption based on sexual orientation or gender identity to immediately pass laws protecting LGBTQ+ individuals' and couples' right to adopt!

Republicans across the country are minimizing the impacts of Roe v. Wade, claiming that people can simply carry a pregnancy to term and give a baby up for adoption as an alternative - as if that is such a simple, easy thing to do. To make matters even worse, even after the federal marriage equality ruling in 2013, there is no formal protection against discrimination in adoption based on sexual orientation or gender identity in over a dozen red states. This means it is harder for LGBTQ+ individuals and couples to adopt, despite conservatives' claim that adoption can easily replace abortion (which we know is untrue). Clearly, these policies are hypocritical: if you want more adoptions and less abortions, shouldn't you be ensuring as many people as possible have fair access to the adoption process? It's almost like cruelty is the point.

It is time Idaho, Utah, Wyoming, Texas, Nebraska, Oklahoma, Kansas, Arkansas, Louisiana, Mississippi, Alabama, Georgia, Virginia, Pennsylvania, and Florida stand up for LGBTQ+ rights and children needing to be adopted across the country by explicitly protecting couples from discrimination in the adoption process based on sexual orientation or gender identity. We will unfortunately likely see a rise in the number of children up for adoption in the coming years given the awful Roe v. Wade ruling, and a parent should never be disqualified because of who they love or what pronouns they use. Sign the petition now if you agree!

Care2
Demand LGBTQ+ Parents Have Equal Adoption Rights As Everyone Else!
CONDIVIDITWEET