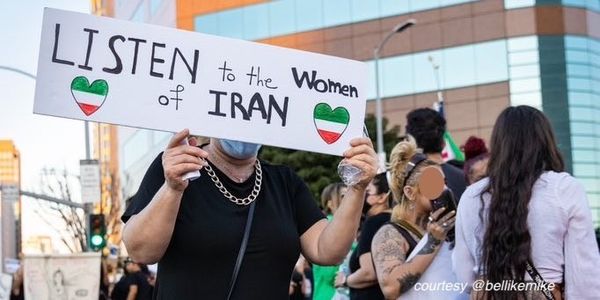 Morality Police Tortured a Young Woman in Their Custody Until She Died. Mahsa Amini Deserves Justice!

Care2 Update (11/3/2022): The U.S. just announced it wants to remove Iran from the UN Commission on the Status of Women. This is a promising step in the right direction by the international community, but more needs to be done. Keep signing and sharing to demand justice for Ms. Amini!

Jina Amini - also known as Mahsa Amini, after being forced to change her Kurdish name - was only 22 years old when she and her family decided to take a brief trip from their local province to go shopping in Iran's capital city of Tehran.

But along the way, the country's morality police noticed her and claimed she was wearing her mandatory head covering too loosely. Her family tried to explain they were just visiting, but authorities loaded her into a van and took her into custody. Supposedly they were only going to "re-educate" her for 1 hour. Instead, eyewitnesses say she was beaten. Within an hour and a half, she fell into a coma. Then, several days later, she died.

We must come together as an international community to demand true justice for Jina (Mahsa) Amini!

Tens of thousands of Iranians from all over the country - and millions of people all over the world - have come together to protest her abuse and alleged murder. Yet Iran's chief officials are more interested in arresting protesters than holding Amini's tormenters responsible.

Ms. Amini's father says the government refused to let him view his daughter after she died until the funeral. He spoke to the BBC about the government, "They're lying. They're telling lies. Everything is a lie ... no matter how much I begged, they wouldn't let me see my daughter." When he finally did see her, authorities had wrapped up her entire body, except for her face and feet, shielding the rest of her being from sight. However, Mr. Amini observed clear signs of bruising on his daughter's feet. He said, "I have no idea what they did to her."

Meanwhile, Amini's cousin says there is ample evidence that she was beaten and tortured. According to witnesses he's been in contact with:  "She was tortured in the van after her arrest, then tortured at the police station for half an hour, then hit on her head and she collapsed." Indeed, the building where police held Amini had CCTV - yet Iranian officials have refused to reveal the full video. Instead, they released a version of the footage that they clearly edited: 19 seconds in, the video cuts from daylight to the dark of nighttime.

Iranian citizens and people around the globe have refused to look the other way in response to this violence. Already, police in Iran have arrested thousands of individuals for speaking out and protesting. They've cornered hundreds of students on the premises of an elite university in Tehran, trapping them and pelting them with bullets and batons. The nonprofit organization Iran Human Rights estimates that authorities have killed upwards of 75 civilians.