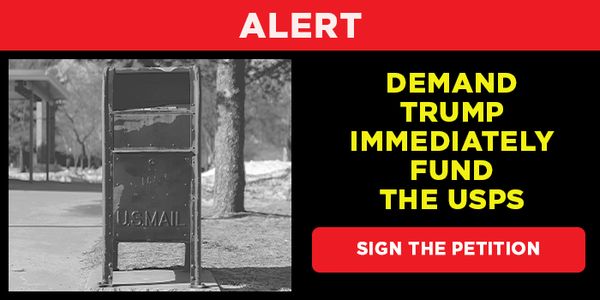 Trump is nearing total control of the people's postal service.

This month, Louis DeJoy – a prolific Trump donor – began his first day as the head of the US Postal Service. From now on, Trump will have one of his most loyal allies leading the agency he hopes to destroy.

With this latest move, Trump is making his position clear: He will do everything in his power to shut down America's post offices. And as the USPS warns of an imminent shutdown without funding, time is running out for us to make our demands heard.

With millions relying on the USPS every single day, we CANNOT let Trump and his right-wing cronies win. Sign on to demand Trump and Republicans immediately fully fund the people's postal service.

Louis DeJoy is wholly unfit to lead the Postal Service.

At a time when post offices around the country are on the brink of crisis, the Washington Post reports that DeJoy is "the first postmaster general in two decades who did not rise through the agency's ranks."

More than 600,000 postal workers could lose their job if Trump lets the USPS close. We cannot let that happen.