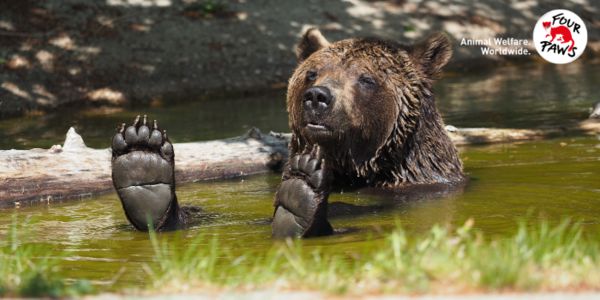 Join the Paw Pal movement to stand against bear cruelty

Around the word, bears are being abused.

In Eastern Europe, bears are imprisoned in small cages and made to perform tricks in the name of entertainment. Or are kept as pets in miserable conditions.

In Vietnam, they are kept in tiny cages under appalling conditions on bear farms, and their bile is extracted for use in traditional medicine.

There is so much cruelty inflicted against these vulnerable animals. They need our help.

Thanks to effective government lobbying, FOUR PAWS has ended the private keeping of bears in Poland and rescued and brought these bears to sanctuaries.

Help put pressure on other governments to follow their lead.

Together we can give rescued bears a new life in one of the seven FOUR PAWS bear sanctuaries located across Europe and Asia. We have already rescued over 200 bears since 1998 and over 150 bears are currently living a kinder life in their forever sanctuary home. They are feeling the grass under their paws, climbing mountains and playing in forests. They are bears again.

Join our movement to free captive bears all over the world. Become a Paw Pal for the #saddestbears.

It's together that we can end bear suffering.