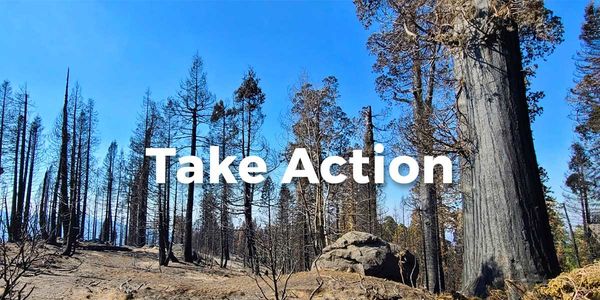 Raise Your Voice to Save Giant Sequoias

We need your voice in asking lawmakers in Washington, D.C. to take urgent action to protect our treasured giant sequoias from destructive wildfires. An estimated 20% of all the mature giant sequoias in the world have been lost since 2015, when wildfire magnitude and severity sharply increased in California's Sierra Nevada. Many of these trees were 1,000-3,000 years old.

As wildfires in the West have reached unparalleled severity, they pose an existential threat to giant sequoias, some of our most iconic forests. Having thrived through countless fires over millennia, thousands of these trees have perished in today's climate-driven fires. Thankfully, significant funding, policy, and legislative solutions are available to protect the remaining giant sequoias and adjacent communities.

Save the Redwoods League, our partners, and other giant sequoia land managers have set a goal of treating 2,000 acres in the most at-risk groves before the 2023 fire season. This is a vital first step in preserving a future for these magnificent forests that are a part of our national heritage and attract millions of visitors.

In recent years we've watched a tragedy unfold in the Sierra Nevada as severe wildfires have ripped through our iconic giant sequoia groves, killing an estimated 20% of all the mature giant sequoias in the world since 2015. This is happening because forest managers for decades have suppressed nearly all natural wildfires and Indigenous cultural burning, creating an unnatural buildup of smaller trees and shrubs. Combined with drought and longer wildfire seasons, this has created a tinderbox in the groves.

Thankfully, significant funding, policy, and legislative solutions are available to protect the remaining giant sequoias and adjacent communities. Here are a few:

The Giant Sequoia Lands Coalition, consisting of government agencies, tribes, and nonprofit organizations, has set a goal of treating 2,000 acres of the highest-risk groves before the 2023 wildfire season. Home to some of the planet's oldest and largest trees, California's giant sequoia forests draw millions of visitors from across the globe and are a beloved part of our nation's natural legacy. Again, please take action to protect these forests now.

Care2
Raise Your Voice to Save Giant Sequoias
CONDIVIDITWEET