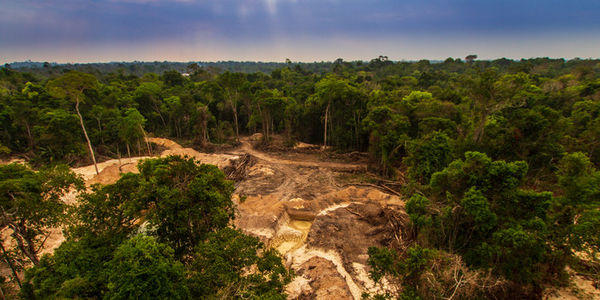 Criminal Mining Operations Are Destroying the Brazilian Rainforest. The Government Must Crack Down, Now!

It is no secret that the Amazon rainforest is in trouble. For several decades, Indigenous people, environmentalists, and human rights defenders have been sounding the alarm about the threats facing the world's largest and most iconic rainforest.

But now, a shocking New York Times investigation revealed that the forces destroying the Amazon are finding other insidious, illegal ways to rip up the area: by seizing hundreds of airstrips and using them to fuel the criminal mining industry - often illegally located on Indigenous land. Meanwhile, Brazilian President Jair Bolsonaro is doing nothing to protect this vital ecosystem or the Indigenous people who live there.

Sign now to demand that President Bolsonaro and the rest of the Brazilian government crack down on the illegal airstrips and criminal mining activities that are destroying Brazil's Indigenous land and environment!

In the past few years of the Bolsonaro presidency, the Amazon has been pillaged, threatening years of positive conservation efforts. Huge segments of rainforest have gone up in smoke and flames, causing the Earth to lose one of its most powerful and important carbon sinks, which help ward against worsening carbon emissions and climate change. On top of that, mining companies have been determined to decimate the environment in order to extract every last little bit of gold, tin, copper, and iron ore they can collect.

One of the ways mining companies have done that is by seizing government airstrips and building additional thousands of airstrips of their own. These airstrips are important because they allow "wildcat" miners to access remote areas of the Amazon which, otherwise, would be off-limits by car or other transportation. To make matters worse, investigative reporters have discovered 61 of these airstrips on Yanomami Indigenous territory - a place corporations have no right to be interfering.

In theory, these ancestral lands are protected by the Brazilian government, but in actuality, officials now estimate that 30,000 miners are working illegally on this territory. During his reign, Bolsonaro has purposefully weakened the regulatory bodies and military responsible for ensuring the safety of the Indigenous people and their homelands, making conservation and human rights protections extremely difficult.

As mining operations have escalated dramatically in number and size, miners are increasingly daring to intrude on Indigenous territory - and in the process, they are poisoning the people there. Mining operations cause toxic runoff, usually contaminated with mercury, which flows into the waterways, and lodges itself in fish and humans. The government itself acknowledges that rivers in the Yanomami territory now have 8,600% higher mercury levels than is safe for people to consume.

Deforestation is a key step in building these airstrips and establishing mining operations. That's deeply disturbing because the Amazon also acts as a form of a planetary sponge that is crucial to stabilizing our climate: this one rainforest alone is responsible for absorbing a quarter of all CO2 absorbed by land on Earth. But because of deforestation, the Amazon has been less able to sequester carbon from the atmosphere. By some measures, it is absorbing 30% less greenhouse gasses than it did in the 1990s.

We must put pressure on Bolsonaro and the rest of the Brazilian government to act quickly to protect the Indigenous land of the Amazon and crack down on these illegal mining airstrips and mines. They are hurting the rainforest itself, the Indigenous communities who have called it home for generations, and the entire planet and climate which depends on the health of this essential ecosystem. Sign the petition now if you agree!
Firma la petizione
CONDIVIDIcondividi con gli amici di FacebookTWEETE-MAILINCLUDI
Firma la petizione
Vedi altre petizioni:
JavaScript è disabilitato. Il nostro sito potrebbe non funzionare correttamente.

Care2
Criminal Mining Operations Are Destroying the Brazilian Rainforest. The Government Must Crack Down, Now!
CONDIVIDITWEET