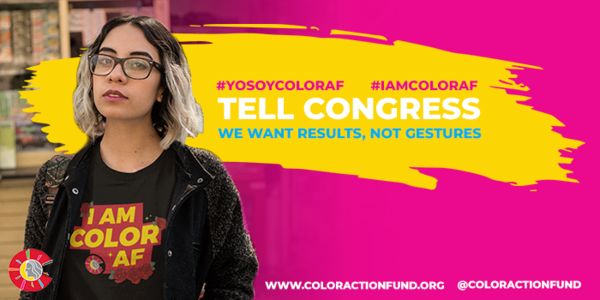 Tell Congress: We want #ResultsNotGestures! The Latinx community showed up to the polls, and now we're watching.

Last November, the Latinx community rose to the challenge and helped end an era of fear by electing Joe Biden to the presidency and flipping the House and Senate — but the work is not done.

For too many election cycles, it has been the status quo for the Democrats to count on communities of color to turn out to vote but then, once in office, somehow fail to prioritize the issues that most affect those communities. And women of color aren't having it anymore.

In November, after years of being written off for low turnout, Latino voters flooded the polls, playing key roles in Biden's narrow victories in Arizona, Wisconsin, Nevada, and Pennsylvania. In Colorado, 68% of eligible Latinos voted, an increase of 100,000 voters from 2018, and 74% of them voted for Biden — even though only 45% are registered Democrats.

We will no longer be tokenized as the "sleeping giant" during election season. People like us, advocates and activists, are the ones who are supporting progress within our communities. And we have been awake for a long time.

Colorado Organization for Latina Opportunity and Reproductive Rights Action Fund (COLOR AF), and our partner organizations made more than 5.5 million phone calls, sent more than 4.6 million texts, and knocked on 13,000 doors in the weeks leading up to November 3.

And now we expect action from the people we chose to represent us.

Care2
Tell Congress: We want #ResultsNotGestures! The Latinx community showed up to the polls, and now we're watching.
CONDIVIDITWEET