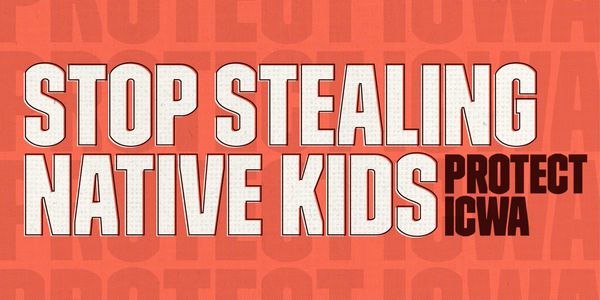 By signing this petition, we're asking people to do three things:

The forced assimilation of Native peoples in the U.S. has always targeted children. That's why over 40 years ago, the Indian Child Welfare Act (ICWA) was put into place. Its number one goal? To curb the generations of harm caused by Native children being separated from their families and tribal communities.

What many people do not understand is that Native children being separated from their families is a modern issue, impacting far too many Native children to this day. And come November 9th, the law working to protect these children from being forcibly removed from their homes and families will be challenged in front of the Supreme Court of the United States.

So what is ICWA and how does it protect kids? The Indian Child Welfare Act (ICWA) protects Native kids in child welfare proceedings by ensuring that they are not removed from their families unless doing so is necessary for the child's safety; and when removal is necessary, ICWA gives preference to placing the child with extended family, or with members of the child's tribe, or with other Native families. Child welfare organizations consistently describe ICWA's protections against child removal as "the gold standard" for all children, and medical, scientific, and social science research all shows that ICWA's placement preferences promote and protect the best interests of Native children.

Unfortunately, ICWA is not a mainstream issue. Outside of Native peoples, child welfare experts, and some policymakers, ICWA is unknown or misunderstood. We need to bring more visibility to this issue to show support for the law in the court of public opinion before the Supreme Court issues its decision.

Our opponents in Haaland v. Brackeen—Texas Attorney General Ken Paxton, The Goldwater Institute, and private interests—are ultimately motivated by profit and are not afraid to harm kids in order to accomplish their goals. Their efforts, both within and outside of this case, put an enormous toll on state and federal budgets, and cause harm to the rural areas that often rely on the strength of Tribal Nations' economic development, advocacy for the environment, job creation, and education, amongst other things. If our opponents succeed in dismantling ICWA, they will have also cleared the way for a larger attack on Native families, Native land, and tribal sovereignty.

For more information and resources from the Protect ICWA campaign, visit https://linktr.ee/protecticwa.