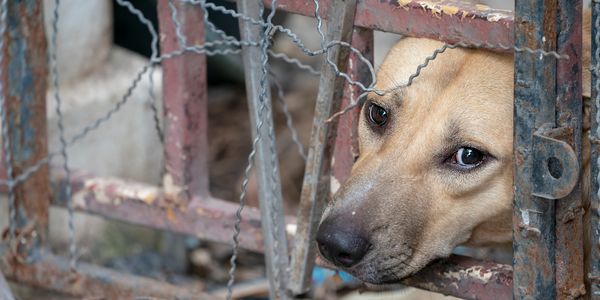 In South Korea, over 2 million dogs per year are kept in devastatingly cruel conditions before being slaughtered for their meat. These dogs often have no water, very little food, and live in inhumane environments where they are exposed to extreme heat, storms, and below-freezing temperatures. This is one of the only remaining places in the world where dogs are still bred for human consumption, which actually stands in opposition to the rapidly growing public opinion in South Korea that dogs are companions, not livestock.

Sign now to tell President Moon Jae-in: we stand with you and support a ban on eating dog meat in South Korea!

Like so many animals bred for food, dogs that are farmed often suffer from diseases and malnutrition. Photos from farms and during transports show dogs in cages hardly bigger than their body. These animals live in constant neglect, perpetual boredom, and sometimes self-mutilate as a result. Worse yet, the way these animals are killed can cause immense suffering and pain -- electrocution is typical.

But a cultural shift around dog meat consumption is happening, for the better. The majority of South Koreans do not eat dog meat, and increasingly, South Koreans are opting to take dogs as pets rather than eat dog meat as a part of their diet. As many as 40% of restaurants selling dog meat in Seoul have closed in the last 10 years.

South Korea's animal protection law is a good step in this direction, but it does not ban consumption altogether. We agree with President Moon Jae-in and the majority of South Koreans in believing that now is the time to take a stand: the ban of dog meat in the country is long overdue! Sign if you agree!