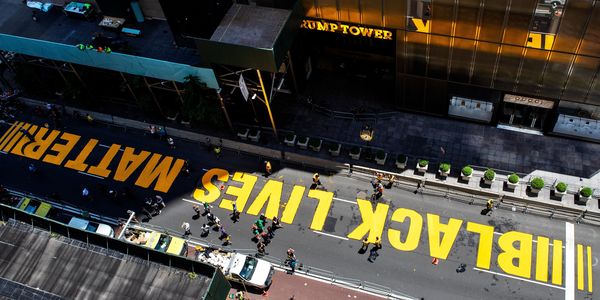 In response to the national protests against police brutality toward Black people, New York City officials have painted a giant Black Lives Matter mural on 5th Avenue. And it's right in front of Trump Tower.

Trump has responded unsurprisingly, calling this proclamation of equal rights "a symbol of hate." His completely-uncoded white supremacist reaction to the mural tells us one thing: Trump, and the base he's pandering to, need to read this message until it sticks.

To be clear, the city and our country have a long way to go in achieving racial parity and this mural unaccompanied by action will not get us there.

However, what the mural does achieve is telling Trump that we see through his "Law and Order" throwbacks to segregation-era. It shows anyone who stays at Trump Tower that their residency supports white supremacy. And to the millions who visit Fifth Avenue each year, it says: Black Lives Matter, and it's time for you to get on board with proving it.

Sign here to tell New York City leaders to make the Black Lives Matter mural in front of Trump Tower permanent – because until our law enforcement and political/legal systems recognize it, we need to keep saying it.