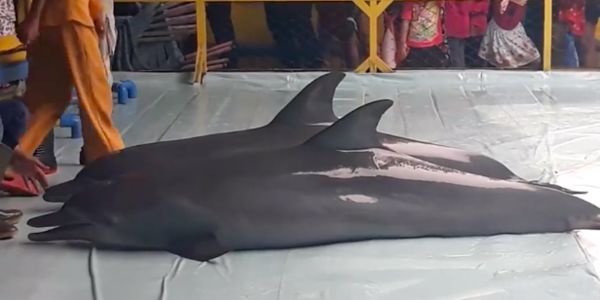 Dolphins Are Suffering for Selfies. It's Time to Stop Mobile Dolphin Circuses.

Animal circuses and traveling zoos are an often target of animal rights activists. Care2 and people like you have been working for years to get countries to change their policies and outlaw these institutions. They exist all over the world from Germany to France and the United States and Russia.

But the story about dolphin abuse in Indonesia is both shocking and saddening. Indonesia, no stranger to serious animal abuse scandals including the horrific dog meat markets of Sulawesi, is home to several small traveling circuses that count dolphins as part of their entertainment.

Most traveling circuses at least have the courtesy to use land-based animals but in the island nation of Indonesia, several companies travel with popup plastic pools so paying customers can get an up close and unnatural view of their poor helpless dolphins.

At each new city, the circuses set up their pool, plop their dolphins in and force them to do tricks for the cheering crowd. In some cases, they even force them to ground themselves so customers can take selfies with the dolphins completely out of the water. The Movement to End Animal Circuses in Indonesia recently filmed such an event.

This would be like dropping a person out of a plane. They would be helpless. Dolphins aren't meant for life in a tiny plastic pool and they certainly aren't equipped to live outside of water. To force them to beach themselves all for a photo is a whole other level of cruelty.

But if that wasn't enough, when the circus is ready to move on, they load them into stretchers, stuff them in cases and ship them off to another city. They are treated as if they were an Amazon package!

This kind of cruelty is happening all over Indonesia and it must stop today.