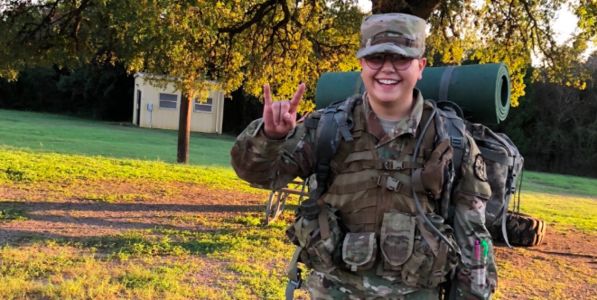 This Trans Student Just Lost His Scholarship For a Horrible Reason

Like thousands of other young American boys, Map Pesqueira decided that he wanted to give back to his country by joining the military. In high school, he signed up for the Army Reserve Officers' Training Corps (AROTC) was so successful, that by the time he graduated he received a national scholarship from the Army. The scholarship would help him afford the exceedingly high cost of education in the U.S.

Next thing you know, he was studying at the University of Texas at Austin (UT) working towards a degree in Radio/TV/Film. To most people, it would seem that Map, now 19, had everything going his way. He had met challenges head-on and overcome each and every one of them. Except the government under the Trump administration has now placed a hurdle in his path that he may never get over.

This April the Department of Defense, following Trump's orders, trans people are no longer eligible to join the military. Under the new rules, anyone taking hormones or who has already transitioned to their preferred gender will be blocked from enlisting in the military. That new regulation will affect thousands of hopeful trans boys and girls who wanted to be all they could be. It also affects Map.

As a trans man, who is undergoing hormone replacement therapy, he is no longer eligible to join the Army. And since he is no longer eligible, the Army has revoked his scholarship meaning that he can no longer afford to go to the school of his dreams and complete his studies. UT's Army ROTC department even petitioned the Department of Defense to make an exception for Pesqueira but they refused and now his future is up in the air.

Trump's disgusting discriminatory policy is a shame to America. It should never have been allowed to go into effect. But now that it has, it is up to other institutions to protect those affected from its repercussions. The University of Texas shouldn't force a talented, promising student to withdraw for reasons completely out of their control. Instead, the school should step up and provide him full tuition so that he can finish his studies. Doing so would not only be a strong rebuke of the military's new trans ban but it is also the right thing to do.