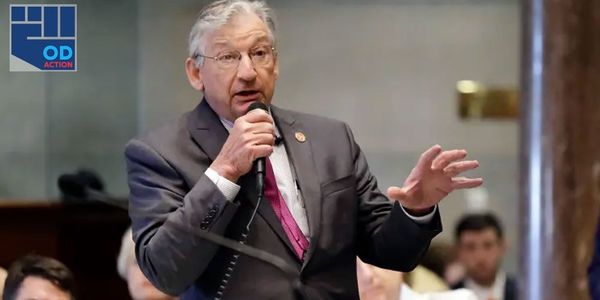 Expel the Republican state senator who said homeless people should look up to Hitler!

In one of the most unhinged and bewildering speeches of the year, Tennessee state Senator Frank Niceley said that homeless people should look to Hitler for inspiration.

Yes, you read that right. Niceley crudely opined that "[in] 1910, Hitler decided to live on the streets for a while. So for two years, Hitler lived on the streets and practiced his oratory, and his body language, and how to connect with citizens and then went on to lead a life that got him in the history books."

While a literal neo-Nazi might agree with Sen. Niceley, it's safe to say most people would confirm that Hitler's "life that got him in the history books" is not one to be heralded in any case (let alone on a statehouse floor). The fact that the GOP senator had the gall to announce this on a public stage is a grim reflection of the bigotry still permitted in our legislatures.

Add your name to call for the immediate expulsion of Sen. Frank Niceley, who heralded Hitler while talking about the homeless!

Nicely did attempt to qualify his ridiculous statement — albeit feebly — noting that Hitler went on to live an "unproductive life." Unproductive isn't exactly the right word to describe the person who masterminded the genocide of twelve million people.

To make matters even worse, Niceley was giving a speech in favor of criminalizing homeless encampments on public property — instead of championing sustainable action on affordable housing. He had the nerve to not only vote to criminalize homelessness, but allude that the homeless community was less valuable to him than Hitler. Frank Niceley isn't someone that should be allowed within 500 feet of a government building, much less the right to write laws.

Care2
Expel the Republican state senator who said homeless people should look up to Hitler!
DELENTWEET