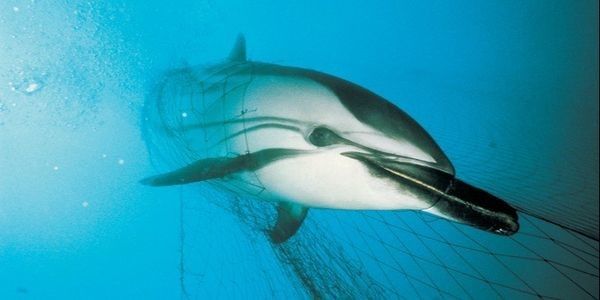 Australia's shark nets — the dubious contraptions designed to keep sharks from reaching beachgoers — are supposed to keep swimmers safe. But more than anything they kill marine life.

The cruel devices ensnare and often kill thousands of protected species like dolphins, turtles, rays, and whales. Case in point, what happened earlier this week off Australia's Gold Coast. Rescuers found a young adolescent Humpback completely entangled in a shark net. According to the Huffington Post, "the whale was thrashing and rolling repeatedly in an effort to free itself from the net, which caused the lines to tighten around its tail and pectoral fins."

The whale was the fourth this year to get entangled in a shark net and if it hadn't been for rescuers, who risked their lives to free the marine mammal, it likely would have tired and drowned. The story might have a happy ending but not all are lucky enough to be saved. In fact, last year, shark nets in the state of New South Wales (NSW) alone ensnared more than 300 nontarget animals and killing half of them.

Shark nets aren't even proven to protect the public from attacks. In NSW, for example, 65% of shark bites occur at netted beaches.