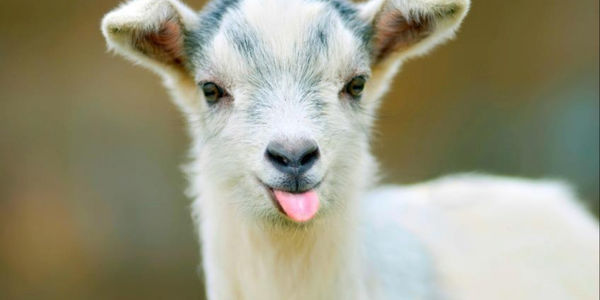 FROM PETA, please know that:
In the cashmere industry, they're frequently shorn in midwinter, at a time when they need their coats the most, and as a result, the vulnerable animals can die of cold stress. Even if they don't die from the cold, goats are forced to endure painful shearing and then slow, agonizing deaths when they're deemed no longer profitable.

Goats used for their wool are deprived of the very things that they desire most from life, and their protective coats are removed without their consent. Like humans, they have rich emotional lives and social connections as well as the ability to feel pain, fear, and love. Here are some other facts about goats that you might be surprised to learn:
1. Goats love Italian food.
Bet you didn't know that goats love pasta and that they'll go to great lengths to get some. One scientist explains, "I haven't found any goat [who] does not like pasta." He has also said that they'll "gaze at humans in the same way as dogs do when asking for a treat that is out of reach."

2. They rival dogs in forming emotional connections with humans.
Scientists have suggested that goats look to humans for help and rival dogs in the extent to which they form emotional bonds with their human companions.

4. They can remember a learned skill for years.
In one study, goats demonstrated the ability to break into a sealed box using levers. Additionally, they can remember the skill four years later without prompts.

5. If you buy cashmere, you may be supporting the meat industry.
Goats who are used and killed by the cashmere industry are often sold to markets as cheap meat.

6. Goats are vegan.
That's right! They're herbivores whose favorite food is grass.


7. Kids grow up so fast.
Just minutes after kids are born, they're up and strutting around.

8. Goats are selective eaters.
They're surprisingly selective eaters, able to pick leaves off thorny bushes, climb trees to reach yummy sprigs, and seek out the tastiest blades of grass.

9. Color them curious.
Goats are naturally curious. If something new comes to their attention, they'll be checking it out in no time. (See point number four for more proof of their curious nature.)

10. They feel fear.
When goats feel fearful, they run in different directions from their friends, making them more difficult to chase than animals who stay with their herd.

11. The cashmere trade is threatening other species.
One study on the declining numbers of large mammals in Central Asia found that "as pastoralists expand goat herds to increase profits for the cashmere trade in Western markets, wildlife icons from the Tibetan Plateau to Mongolia suffer—including endangered snow leopard, wild yak, chiru, saiga, Bactrian camel, gazelles, and other remarkable but already endangered species of remote Central Asia."

12. Pollution from the Chinese cashmere industry is wafting over to America.
It's hard to believe, but the Chicago Tribune has reported that China is raising so many goats for the cashmere industry that their grazing is "unleashing some of the worst dust storms on record. This in turn fuels a plume of pollution heavy enough to reach the skies over North America."