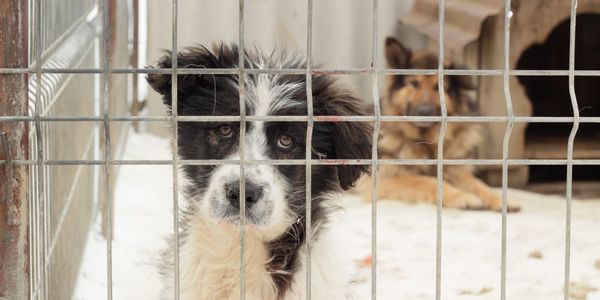 His entire job was caring for animals who had been abused. But he ended up abusing them horrifically himself.

"...they were screaming for us to help them."

That was how Candi Bridges described the noises coming from dogs locked in outdoor cages at the Oklahoma City of Fletcher's Animal Kennel. She went to the kennel after learning about dogs that might be in trouble there on Facebook, but what she saw firsthand was worse than she ever could have imagined. There were four dogs, all trapped in snow-filled kennels. There was no food in sight, every water bowl was frozen solid, and there was urine and feces everywhere.

And the worst part? This was the kennel where dogs went when they had been saved from animal abuse. But (now former) animal control officer Timothy Peek decided to continue the cycle of cruelty by abandoning these dogs to freeze, starve, or die of dehydration.

Sign the petition and demand that Timothy Peek's sentencing include never being allowed to own animals! Part of his sentence should also be to never be allowed to work with animals again, setting the precedent that no one with a history of animal abuse can be an animal control officer.

Candi Bridges was a hero that day, and took every single one of the dogs with her on the spot, taking them into the warmth of her home. She even rushed one immediately to the vet -- the poor thing had come to animal control with a previous injury, and they never even took it to the vet for care. She has decided to adopt one of the dogs, and the other three will be adopted out soon. The story ends happily for them all, but it could have easily gone a different direction.

This happened in February in Oklahoma, during a stretch when snow was falling and temperatures were dropping as low as negative five degrees Fahrenheit. The chainlink walls of their cages offered little protection from the gusts, and inches of snow covered every surface -- the poor dogs couldn't stand, walk, or lie down without touching ice or snow.

And yet, when police investigated the situation, there were no tire tracks or footprints in the fresh snow. They estimate that the dogs had been left out there, freezing, thirsty, hungry, and alone, for four entire days.

Luckily, Timothy Peek has been fired and taken into custody. He showed no remorse for what he did to these innocent animals, yelling "F*ck those dogs," as he was arrested. Then he lied through his teeth, backtracking and saying that he had no idea such a winter storm was going to happen -- despite his having posted on social media about how to prepare for winter weather with animals. How horrifically ironic.

Obviously, Timothy Peek is not fit to hold a position in which he is responsible for caring for vulnerable animals -- these dogs specifically ended up in his custody because they had been victims of cruelty, and he abused his power to the utmost degree by abusing them more.

Sign the petition and demand that Timothy Peek is barred from ever owning an animal again, or having a job in animal care and control!

Care2
His entire job was caring for animals who had been abused. But he ended up abusing them horrifically himself.
DELENTWEET