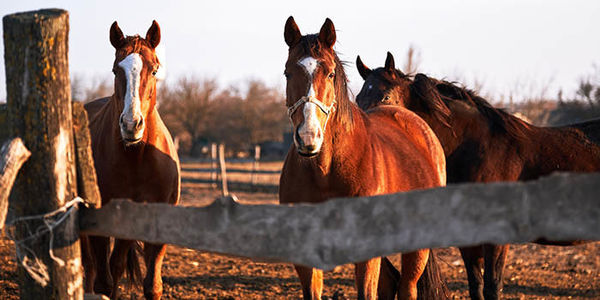 Tell Senators: put an end to the horsemeat industry once and for all!

Each year, more than 100,000 horses are shipped out of the United States — to either Canada or Mexico — where they are slaughtered to feed the demand for horsemeat around the world.

After 18 years of fighting against this predatory and evil business, we have a new — perhaps last — opportunity to ban the horsemeat trade once and for all.

Reps. Troy Carter, Brian Fitzpatrick and John Kakto are sponsoring an amendment to the INVEST Act, H.R. 3684, to ban the transport of horses for slaughter across American borders, effectively putting an end to this horrid business that has killed more than 4 million horses.

This is where horses need your help. The INVEST Act is expected to be voted on by the Senate soon. It is of crucial importance to build up support and send a clear message to U.S. Senators that Americans support this legislation and want a federal ban transport of horses for slaughter abroad to be enacted into law.

We will never have an opportunity like this to drive the last nail in the coffin and drive the slaughter industry into irrelevance. Horses need us more than ever and the outcome of this legislation will likely seal the fate of American horses for the next 4 or 5 decades, judging by the speed Congress acts on issues.

The bloodshed needs to stop now. Sign the petition and tell your Senator to vote for the amendment to the INVEST Act, and put an end to the cruel horsemeat industry once and for all!
petitiebrief lezen ▾
Dear Senator,

Americans overwhelmingly oppose the practice of killing horses for food, yet tens of thousands of our horses continue to be exported annually to Canada and Mexico to be butchered in slaughterhouses. The entire process of horse slaughter - from cramped and dangerous transport conditions to stunning methods with a bolt (or several) to the horse's brain - is inherently cruel. Horses are frequently purchased at auction from unsuspecting sellers by "kill-buyers" who then profit from selling the animals to foreign slaughterhouses. These horses, who are typically healthy, sound, and young, must endure long, overcrowded journeys without adequate food, water, or rest. Not all survive the trip.

Before the last horse slaughter facilities closed in the United States, the U.S. Department of Agriculture documented serious welfare problems, including horses arriving at the facilities in appalling conditions after torturous journeys. Virtually any horse can be one bad sale from entering into the slaughter pipeline. Equine rescue groups are often the boots on the ground when it comes to saving horses from this form of cruelty.

I urge Congress to include provisions in the next transportation package prohibiting the interstate transport of equines for the purpose of being slaughtered for human consumption. The amendment led by Reps. Carter, Fitzpatrick, Titus, Katko, Cohen, Buchanan, Schakowsky, Barr, Carter, Tonko, Payne, Reschenthaler, and Nadler is vitally important for protecting horses from meeting this gruesome and unnecessary fate.

I respectfully urge you to vote YES on the Carter-Fitzpatrick amendment to H.R. 3684.

Care2
Tell Senators: put an end to the horsemeat industry once and for all!
DELENTWEET