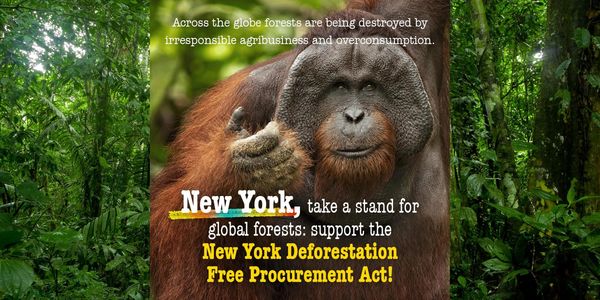 We need forests to keep our planet safe. This New York bill would do just that!

The following petition has been endorsed by the Sierra Club, Friends of the Earth, and Natural Resources Defense Council (NRDC).

Deforestation is a major driver of climate change. It causes 10 to 15 percent of greenhouse gas emissions worldwide. If deforestation were a country, it would be the third-largest national emitter in the world. What's more, keeping forests standing and promoting reforestation is vital to carbon sequestration, a key solution to avoiding climate chaos.

Sign our petition to urge lawmakers to pass a strong law to fight the loss of our climate-critical forests! The New York Deforestation-Free Procurement Act needs your support

This monumentale bill would ensure that products New York State buys and imports are not contributing to the loss of Earth's most vital ecosystems. New York State has a moral responsibility to our entire planet and future generations to become better stewards of the environment. This legislation will ensure that New Yorkers' tax dollars are not driving deforestation and degradation of the earth's most precious forests, which has gone on for far too long and the impacts of which we will continue to feel. We will continue to feel the devastating impacts of forest loss. This bill looks to protect and preserve what we haven't already lost.

We know the U.S. federal government can be gridlocked, and sometimes it seems unable to deal with climate-related crises. But individual states can make a huge difference and show leadership in this void – and New York State is poised to lead the way. Urge New York lawmakers to say YES to this incredible bill that, if passed, could  actually curb forest loss, inspire other states to pass similar laws, and help humanity truly address climate change! Hear more about why we ALL need this bill from one of the bill's champions, New York State Senator Liz Krueger:

FOE 2022 Liz Krueger from If Not Us Then Who on Vimeo.

By tightening an existing ban on the use of tropical hardwoods for government projects and setting new sustainability and human rights standards for state contractors who deal in forest-risk commodities, the Deforestation-Free Procurement Act will help to ensure that New York State government procurement does not drive tropical or boreal deforestation or degradation, nor violate Indigenous Peoples' rights, while giving a boost to growing supply-chain transparency efforts in the affected industries.

Dozens of environmental and human rights advocacy groups have sent in letters of support for this landmark bill, and it's received the support of investors with over a trillion dollars in assets under management. Winner of the Goldman Environmental Prize (regarded as the 'green Nobel Prize') Alfred Brownell has even visited New York lawmakers to ask them to vote for the bill. Hear about the bill from him here:

FOE 2022 Alfred Brownell.mp4 from If Not Us Then Who on Vimeo.

But we must harness the power in numbers -- by amplifying the voices of folks like you -- to convince lawmakers that saving forests is a priority. Our elected officials have an obligation to us – let's make sure they listen!

If NY pulls this off, it'll be the first state in the U.S. to do so. But New York won't be alone. The European Union and the United Kingdom are already creating regulations to curb imported deforestation-causing products into their jurisdictions. By urging New York to do the right thing, we can send a message to Brits and Europeans that they are not alone.

In addition to harming the environment, deforestation is also often harmful to humans. The practice frequently involves corruption, organized crime, and human rights abuses -- including violence against Indigenous peoples. Urge lawmakers to pass the New York Deforestation-Free Procurement Bill and end the violence against the climate and humans!

Care2
We need forests to keep our planet safe. This New York bill would do just that!
COMPARTILHARTWEET