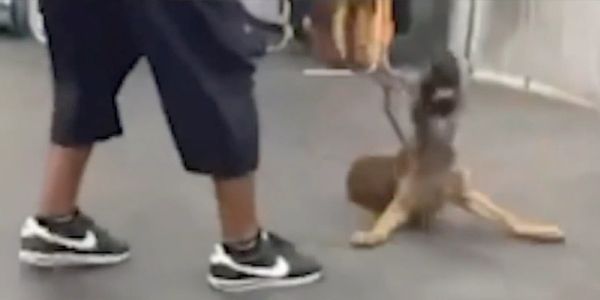 A Dog Was Slammed to the Ground at This "Training" Facility, and It Was All Caught on Tape

A recent video that surfaced on social media shows a person claiming to be an animal "trainer" engaging in disturbing, violent behavior. In the video, a person who is employed by the TyCalK9 training facility in Arcola, Texas is seen slamming a poor dog to the ground. Worse yet, this local training facility boasts a number of high-profile clients, including NBA players and reality TV celebrities, giving it a popular following in the area.

Research shows that dogs don't learn when they experience violence or fear. This type of training has been widely debunked by people who actually study animal behavior, and is clearly just a form of unjust violence against the innocent dog. Yet unfortunately, this allegedly "tough" approach is all too common among animal "trainers" – but it is really simple what this behavior actually is: abuse. The video shows that the "trainer" has a temper and is simply engaging in violence against a poor animal, which can be heard afterward whimpering in pain, or fear, or both. This is not "training." It is cruel punishment against an animal that deserves love, care, and compassion. Local authorities must condemn and thoroughly investigate this case to ensure that it does not happen again.

We must prevent this person from causing any more harm to animals in the future. It is up to the Fort Bend County District Attorney's Office to act now! Sign the petition demanding that his facility must be shut down immediately and the "trainer" in question be investigated and charged!

Care2
A Dog Was Slammed to the Ground at This "Training" Facility, and It Was All Caught on Tape
COMPARTILHARTWEET