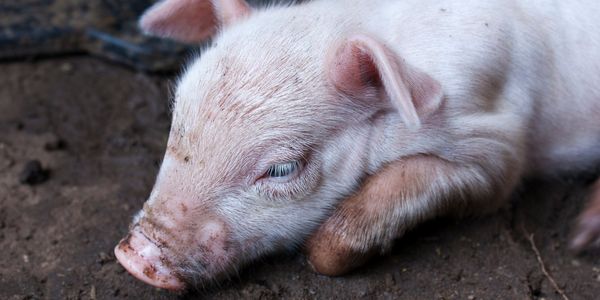 When they were dropped off at an Iowa farm in mid-December of 2021, 2,500 baby pigs had a lot to look forward to. The piglets were meant to thrive and grow, each to about 280 pounds. With the 15 tons – some 30,000 pounds – of feed they were dropped off with, that shouldn't have been a challenge. But just over two weeks later, when a consultant checked in on the baby pigs' progress, they found not growing, happy pigs, but mass death.

Sign the petition and ask that prosecutors in Black Hawk County, Iowa increase charges against the caretaker of these baby pigs who allowed so many to suffer and die.

Luckily, the remaining pigs were removed from the farm and taken to safety. But the poor babies were still in such bad shape that around 50 more died during the move, and 60 passed away in the next few days, too neglected and weakened to survive.

These piglets were dropped off at this farm with everything they should have needed to survive and thrive. So what went wrong? Pure human negligence.

The consultant that discovered the hundreds of dead pigs noted that they didn't seem to have access to water, nor did many have food available to them. Water bowls were "bone dry" and many feeders were empty, devoid of the thousands of pounds of food provided. And sure enough, when Iowa State University's veterinary lab tested tissue samples from the dead pigs, they found their cause of death to be malnutrition and dehydration.

That same consultant also observed that the barns where the piglets were living were below 50 degrees Fahrenheit, or 10 degrees Celsius, even though "freshly weaned hogs need temperatures around 80 to 95 degrees Fahrenheit to survive. It was so cold that the poor piglets' ears were frostbitten, and some of them had literally frozen and fallen off entirely.

The man who was trusted with the lives of these fragile, young piglets has only been charged with a misdemeanor livestock neglect, which at its most serious only carries a sentence of a couple of years in jail and a fine up to some thousands of dollars. But the level of suffering these baby pigs endured cannot be addressed this way.

Sign the petition and ask that prosecutors in charge of this case increase the charges or sentencing against this man so that he is never allowed to own or care for animals ever again!