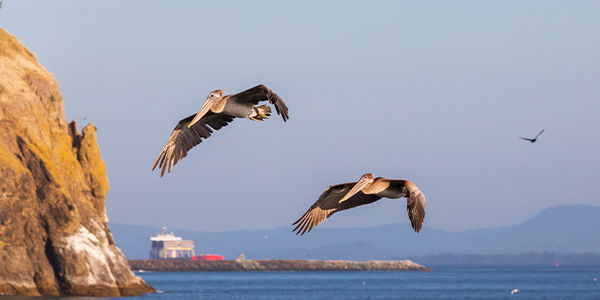 The FY 2022 annual federal spending bill is still pending in Congress, and millions of dollars for birds are at stake. A stopgap measure was just passed to fund the federal government through February 2022, with a vote on the final bill expected early next year.

Federally funded conservation programs get results, helping to save species like the Bald Eagle and California Condor from extinction. These programs also help protect and restore habitat for other beloved species, such as the Brown Pelican and Streaked Horned Lark.

Help imperiled birds now by asking Senator Patty Murray to support increased funding for conservation programs in the Interior Appropriations Bill.
ler carta de petição ▾
With the loss of nearly three billion birds in the United States and Canada since 1970, we need to do more to conserve bird species and their habitats. I am particularly concerned about the decline of one-third of all U.S. migratory bird species, the increasing threats to Greater Sage-Grouse, and the fate of critically endangered birds in Hawai'i — known as the "bird extinction capital of the world."

In addition to opposing harmful policy changes to the Endangered Species Act (ESA) and other critical environmental laws, I ask that you please prioritize funding for the following areas critical to conserving America's birds during the FY 2022 appropriations process:

Increased funding for these programs and initiatives can help chart a better future for our native birds and their habitats, helping reverse this widespread population loss. Thank you for considering these requests.