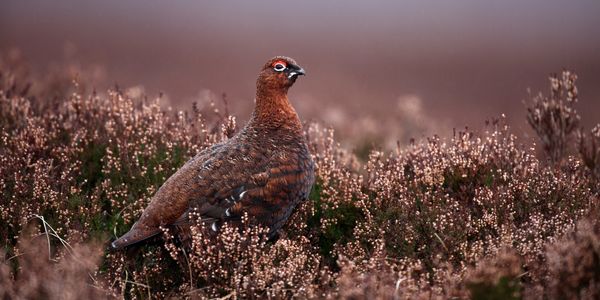 This Tiny Bird Does a Lot For Its Ecosystem, But the U.S. Doesn’t Care That It’s About to Go Extinct

The bi-state grouse, a tiny bird that roams on the border of Nevada and California, is a magnificent thing to behold. The male birds have distinctly puffy chests, spikey tail feathers, and sport beautiful bursts of yellow above their eyes and on their chests. They get even more colorful during the mating season, when the females assess these showy traits to pick a mate who will give her anywhere between 6 and 9 babies -- sweet, downy things that can fly (albeit clumsily) after only two weeks. These birds are as integral to their ecosystems as they are fun to look at -- the bi-state grouse are a distinct population of the greater sage grouse, which support some 350 other species that live in sagebrush.

With all that to recommend them, it would seem likely that the U.S. Fish and Wildlife Service (USFWS), tasked with protecting the nation's wild animals and armed with the Endangered Species Act, would aid them if their population was in trouble. But the USFWS has been fighting legal battles for 15 years to win the right to do absolutely nothing for these suffering birds.

Sign the petition to demand that the USFWS immediately list the bi-state grouse under the Endangered Species Act! There is no time to lose.

Since 2005, conservationist groups have been petitioning the USFWS to finally classify these little birds as endangered, and thus grant them the protections of the Endangered Species Act -- including a hunting ban and protection of their habitat. The bi-state grouse's population has plummeted to anywhere between 300 to 3,000 animals. To put that in perspective: scientists say a species needs a population of at least 5,000 to have even a chance at survival. Obviously these precious birds are in need of outside support. So why aren't they receiving it?

The grouse's battle for endangered species status has been marked by corruption and human greed. The main cause for their decline has been human development in their habitats -- historically, when humans are faced with the choice between their own expansion and monetary gain, versus the survival of an animal, they will always choose the former. In 2017, the Head of the Department of the Interior, a federal agency that oversees the United States' public lands, even announced they were considering leasing land rights to oil companies that would pollute and tear open the grouse's habitat.

Some advocates of the USFWS's decision to not protect the grouse say that voluntary measures are enough to keep the bird alive. But if they are so invested in the survival of this fragile population, why wouldn't they want to make it official? This is too important of an issue to make conservation "voluntary" -- which is another word for "we can stop when we want, when we are offered a high enough price."

No more delay. No more excuses. The USFWS must add the bi-state grouse to the Endangered Species List! Sign the petition if you agree.

Care2
This Tiny Bird Does a Lot For Its Ecosystem, But the U.S. Doesn’t Care That It’s About to Go Extinct
COMPARTILHARTWEET