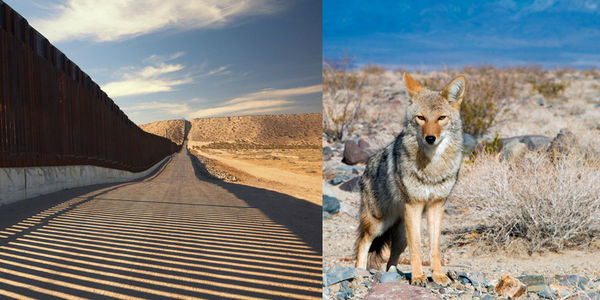 When Donald Trump's administration began construction on their infamous and unnecessary border wall along the U.S.'s southern edge, wildlife conservationists were worried. They knew this would hurt animals that need to migrate between various habitats in the U.S. and Mexico - animals that have no knowledge of human geopolitics and don't understand border walls.

Then, when Joe Biden became president, conservationists were filled with hope. Perhaps Biden's administration would help protect wildlife corridors in the Southern border area, reducing some of the negative impacts of Trump's disastrous wall. But sadly, that ideal has not come to pass. In fact, neither the U.S. nor Mexican governments have paid much attention to protecting wildlife along the border.

Why are wildlife corridors important? Without them, animals are left cut off from important breeding and grazing grounds, as well as their seasonal migration routes. This causes intense disorientation and confusion for the wildlife, who feel lost. Scientists are warning of possible "ecocide" if the U.S. and Mexican governments do not quickly establish corridors for wildlife to freely roam between the borders. What they mean is that, this ecosystem is so delicate and so important, it could collapse if the situation does not improve.

For example, conservationists point to the southern areas of Arizona and New Mexico, where thousands of animals and plant species reside. But those animals don't stay stagnant: they need to travel to Mexico in order to search for mates and other important nutrients, while animals from Mexico must cross over to partake in the local plants.

According to Valer Clark, founder of the wildlife organization Cuenca Los Ojos (CLO), "You've got bears, mountain lions, deer, bighorn sheep, small Coatimundis, chulas, all kinds of animals crossing, all kinds of birds crossing." And those animals cannot make sense of arbitrary human walls or borders. They are accustomed to freely traveling as needed.

To better understand the situation, conservationists installed wildlife cameras around the border. So far, video has shown boars, bears, deer, mountain lions, and more stuck at the wall, pacing back and forth as they struggle to determine how to move forward. Footage demonstrates that a family of wild boars was so desperate to find water, they searched for a way around the wall fo a full five hours.

On top of that, Trump's wall construction destroyed landscapes and ecosystems that wildlife depend on. From blasting mountaintops, to chopping down the foliage that animals feed and live on, construction has meant decimating whole habitats.