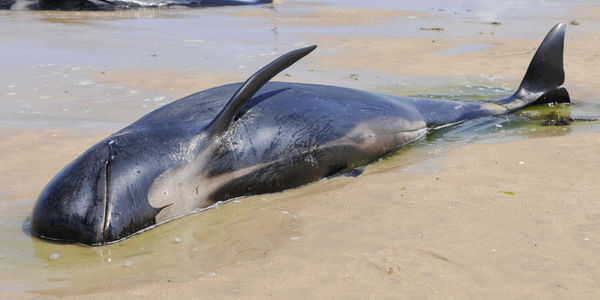 Hundreds of Pilot Whales Died off of Australia's Coast. Prevent Future Tragedies Like This From Occurring!

Exactly two years ago, upwards of 450 pilot whales stranded themselves, dying on the shores of Tasmania, Australia. It was the single largest stranding incident in the region's history. And now, history is repeating itself.

In mid September 2022, another huge group of pilot whales - numbering around 230 individuals - became stranded off the coast of Tasmania again. They beached themselves, and most died. The government of Australia must invest in research to prevent this from happening again!

Sign the petition to demand help for pilot whales!

Once whales are stranded, it is almost certain they will die unless humans intervene extremely fast. Weighing around two tons, "their body weight will literally crush their organs" once they are out of the water, according to scientist Vanessa Pirotta, who is affiliated with Sydney's Macquarie University. They also become vulnerable to sunburn, shock, and other ailments that can prevent them from ever returning to the ocean.

Luckily, a group of rescuers came together to help the few surviving pilot whales. Community volunteers and government workers rushed to take action. They managed to bring around 30 animals back into the water, guiding them into deeper waters using local boats. Satellite information shows at least two of those individuals have made it into further seas.

But strandings like this will keep happening. As climate change wrecks the oceans' ecosystems, animals like pilot whales must search further and further for food sources. That means they'll come closer and closer to the shores of Tasmania, some of which are known to be "whale traps." The shallow slopes along the beaches' ocean floors confuses the whales as they try to echolocate their way around. Once they become disoriented, the panicked animals call out for each other. As highly complex and social wildlife, friends of friends of friends show up en masse to help the confused pilot whale. But then, hundreds can wind up all trapped together.

So far, though, we aren't sure how to prevent future strandings - except, of course, by halting and reversing climate change. But in the meantime, we have to expect that such horrible tragedies will likely continue in the future. The best way forward is to get ahead of the problem by investing in research that will help solve this problem!

Care2
Hundreds of Pilot Whales Died off of Australia's Coast. Prevent Future Tragedies Like This From Occurring!
COMPARTILHARTWEET