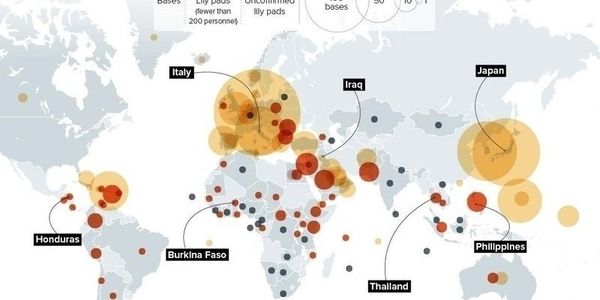 The government of The United States of America publicly admits to owning and controlling 716 permanent military bases scattered across the globe in many different foreign countries. This number, however, does not include the number of bases The U.S. operates in active "war zones" which makes the public knowledge of said bases a sensitive topic. The American public therefore knows, or should know, that we support AT LEAST 716 bases of standing armies in countries that are already peaceful (again: if we did not have a peaceful agreement with these countries, the information would be too sensitive to be released). The number of foreign bases on United States soil? Zero.

These bases exist, ostensibly, to protect our "national security." Just as often, however, they are established to enforce U.S. economic interests. Their establishment is not voted on by the populations of either the United States or the host country. Their construction is permitted, often against a tidal wave of popular outrage and opposition, because of secret and unpublicized sweetheart deals the U.S. makes with its host country (for example: the 1954 U.S.-Italy Bilateral Agreement) or because they are the spoils of American victories in the host countries (for example: The Futenma Base in Okinawa, made possible by WWII).

George Washington, in his farewell address, warned against the power and very structure of the U.S. military saying, in so many words, that the inherent authoritarianism of the military is in direct opposition to democratic institutions and that the enemy of federalism is standing armies. Eisenhower agreed in his farewell address when he famously coined the expression "Military Industrial Complex" to define what he saw: a sprawling, unchecked military that Congress has very little control over. What control Congress manages to have over it is often bought through lobbyists for the defense contractors whose business and livelihood depends on a bloated military budget. Our military, as it is designed now, contains no democratic processes. This system is great under duress and in extreme emergencies; emergency is exactly the state of affairs the military is supposed to exist in and for. When standing armies and military bases exist in foreign countries during peace time, it is not only unnecessary, it is a provocation to those countries, it is a perversion of our own ideals of democratic expression and rule by popular consent, and it is violently disruptive to the lives of the host nation's people.

Building The Futenma Base in Okinawa in 1972 required ejecting that area's home-and-landowners from their land. The base still exists for our "peace of mind" while all of those people remain off their rightful property. In Okinawa, from the time of the base's birth in 1972 to 2003, there had been 5,296 criminal cases committed by U.S. military personnel. 540 of them were serious crimes and 977 of them were cases of assault. The entire population of the obscure island of Diego Garcia was evacuated so The United States could build a strategic military base there. It created a modern-day diaspora.

Let's band together and stop our country from committing these atrocities. Our Declaration of Independence outlines how King George III kept British standing armies in the American colonies who committed "abuses" and "usurptions" and that this act was unpardonable, was worth going to war over. Our military is provoking other countries in the exact same way, a way that might be profitable to the military itself and those companies that supply it, but puts our nation in very real danger and destroys our image of democracy and peaceful coexistence in the world outside of our country. The American people demanded our soldiers be brought home from Iraq in the early 2000's and, despite the fact that the war ended in 2011, we still have a military presence there. The military brazenly ignored our wishes and our government failed us. Let's get the military back under popular control. Let's shut down our foreign military bases, let's give the people of those countries their land and sovereignty back, let's stop giving foreign terrorists and terrorist organizations an excuse to rally against our military presence in their countries (an excuse ISIS, North Korean government officials, and Osama Bin Laden have all used), and ultimately, let's give other countries the respect we give ourselves, the respect we owe them. We would never allow one foreign military base on our country's soil. Let's right that wrong in other places.

Sign this petition if you ask that this injustice stop and we shut down all our foreign military bases. Sign this petition if you ask for more checks and balances and more democratic processes surrounding military practices (at home and abroad) and popular consent of the American people when our military engages in war. After 100,000 signatures we will send this to Congress, to the president, to any officials who will listen to us. If we want foreign aid and/or the strategic land position of other countries in future wars, let us depend on them as an ally, not as a forcefully occupied country. The military has hijacked this country through manufactured conflict and fear-mongering for too long. Let's end it today.