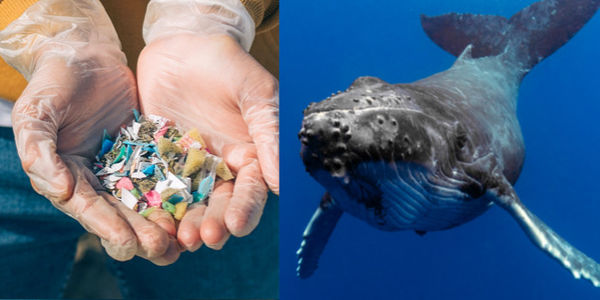 We already knew that microplastics were in our drinking water and food, and that whales are washing up dead with their bellies full of single-use plastic products, but now we're finding that our plastic pollution has even reached the most remote corners of our globe.

Antarctica, that massive sheet of ice covering the Earth's southern pole, is often thought of as so distant, that it's safe from human contamination. Unfortunately, that's no longer the case. Scientists have just discovered tiny, microscopic pieces of plastic waste embedded deep in a sample of ice core that they drilled back in 2009 — some 11 years ago. (And we can only imagine that in the past 11 years, it definitely must have gotten worse.)

This is a problem not only because it proves we've tainted the entire planet but also because it's an immediate threat to the health and stability of the ocean ecosystem. As just one example of the magical ways that our environment is interconnected, ocean ice isn't just some static chilly pile of could-be snowballs. It's actually a rich feeding environment for a type of algae that grows in the ice. The algea, in turn, is a food source for krill, a small type of fish. And for whales, krill is one of their favorite foods. Meaning that all that plastic-laden ocean ice in Antarctica is also becoming the new lining for whales' stomachs.

Microplastics form a special kind of threat to humans and wildlife. We already know that plastic bags, straws, nets, and more have been murdering whales, seals, dolphins, turtles, fish, and birds for years. But microplastics are a different kind of frightening. Broken down into tiny, invisible particles, these bits of microfiber clothes, bottles and containers, rubber tires, microbeads from beauty products, and more are everywhere.

Many of them are covered in toxic materials such as chemicals, dyes, flame retardants, and fossil fuels. They are not biodegradable. And they will never, ever go away. They're so dangerous, the European Union is currently in the process of classifying microplastics as "a contaminant that is unsafe at any level of discharge."

Clearly, these tiny dangers need to stay far away from the bellies of majestic whales and their entire food supply chain. But we need help in order to make that happen. Demand that the governments of the United States and the European Union ban all single-use plastics now to protect our oceans and our environment's health!
Sign Petition
SHAREShare With FriendsTWEETEMAILEMBED
Sign Petition
See more petitions:
You have JavaScript disabled. Without it, our site might not function properly.