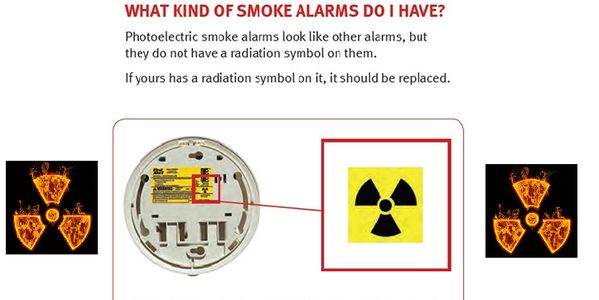 With each day, week, month and years that pass, that these dangerous often deadly ionization alarms are in use, eventually 100’s of 1000’s more victims will either die or be injured, many with terribly painful disfiguring burns, requiring multiple skin grafts and years of rehabilitation and still have noticeable scarring for life. See 4 minute video Silent Alarms about a real life tragic fire that took the life of one baby boy and left his baby brother severely burned due to ionization alarms failing to warn their parents.

Photoelectric and Photoelectric / heat alarms have been available for decades and are what homes need to protect their family from the dangers of smoke and fire. Photoelectric alarms on average are 30 minutes faster to respond to a dangerous smoldering smoke conditions before it turns to flame, at which point evacuation time is less than 2 minutes and occupants in many instances have already been overcome from smoke inhalation or are trapped by smoke and flames, unable to evacuate safely.

Due to the fraudulent testing and the deceptive false marketing by the smoke alarm manufactures whom flooded the market with these dangerous and often deadly devices over last 50 years, over 90% of homes around the world now have ionization alarms in them. Why ? They cost less to make so more profit to manufactures !

According to the National Fire Protection Association - NFPA " Almost two-thirds of home fire deaths resulted from fires in homes with no smoke alarms or no working smoke alarms."

The percentage of homes equipped with smoke alarms is approximately 96% percent with an estimated 90% being ionization alarms. These statistics are an eye opener as they suggest that of the 2/3rds of deaths from home fires, 90% of the time are from ionization smoke detectors that failed to sound alarm either because batteries were removed due to nuisance alarms from cooking, as ionized alarms do sound alarm from small ionized particles from over cooked food and shower steam  or the alarm failed to detect the thicker smoldering smoke / fire entirely.

Further, according to graph on this NFPA page, even the fires where 52% of smoke detectors were operational ( this NFPA statistic seems to differ on percentage from their 2/3rd statistic) accounted for 40% of the fire deaths which suggests the alarms did not sound warning siren early enough for safe evacuation.

Many of these deaths and injuries could have been prevented with safer more reliable photoelectric and or photoelectric / heat detectors with fixed temperature and or rate of rise heat sensors which do not have the high rate of nuisance alarms which leads to users often disconnecting batteries.

The American Red Cross and endorsers of the Red Cross Fire Safety Preparedness Campaign, which include the UL and NFPA, have knowingly been donating and installing only ionized detectors in homes, except where fire codes require photoelectric alarms, according to telephone conversation with the American Red Cross Fire Safety Campaign Director Zach Cahalan on Aug 12th 2015. ( I Just recently spoke to Katie Griffith who works for the American Red Cross in Ohio, which is 1 of 5 States that have legislation mandating use of photoelectric alarms. I was told the A.R.C. only install ionization alarms there in Ohio and do not install alarms in new construction or remodeled homes that are required to have photoelectric under the mandate.)

Both the American Red Cross and United Way do so, despite the official recommendation of the UL , NFPA and other endorsers to use both photoelectric and ionization technologies.

NFPA recommends “For best protection, it is recommended both (ionization and photoelectric) technologies be used in homes”

The stated goal for the Red Cross Fire Safety Campaign is,

"The American Red Cross and its partners have launched an initiative that aims to reduce deaths and injuries caused by home fires by 25% in five years with the Home Fire Preparedness Campaign".

Only one of the American Red Cross Fire Safety Campaign Endorsers, the IAFF, recommends only Photoelectric Alarms. Unfortunately , it seems evident that the Red Cross, The United Way and other organizations, as well as the general public, are not aware of and do not follow IAFF recommendation, due to the IAFF not actively educating people other than posting their recommendation on the IAFF website.

"The IAFF in August 2008 said federal, state and provincial officials should require that all relevant building standards and codes developed in the United States and Canada include a mandate for the use of photoelectric smoke alarms."

Being this problem is not just here in U.S. but poses a danger worldwide and the United Way and Red Cross are international organizations, they could have a real impact when it comes to public fire safety, by having all United Way and American Red Cross Chapters and the IFRC - International Federation of Red Cross and Red Cresent Societies educate the public on the dangers of ionization alarms and installing photoelectric and or photoelectric / heat alarms where donated.

This petition, proposed humanitarian action by all Red Cross groups, the United Way and other charitable organizations that donate smoke alarms would likely exceed the current 25% goal by 50% and cut the timeline of 5 years in half.

That is exactly why we need your help to once and for all bring this to an end.

How You Can Make A Difference:
1) Sign the Petition
Help protect all your friends and family by signing and sharing this petition on Facebook and Twitter.

2) Properly Protect Your Family
We urge you to check your smoke alarms, whether or not they were installed as part of the United Way or American Red Cross's fire safety campaign, and if they are ionization, to immediately "get them out of your home" by replacing them with photoelectric alarms, and if possible, with combination photoelectric / heat alarms.