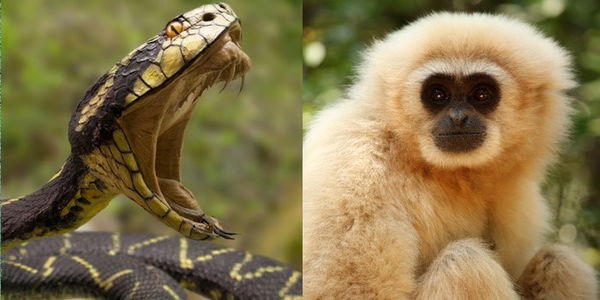 People are forcing snakes to nearly kill pets and primates on video, all just to get YouTube "likes"

Getting clicks, likes, and views is the new big-ticket way to make money, fast. And people will do almost anything to get those likes. One of the newest ways to attract a lot of internet attention is to make videos faking animals attacking each other — allowing the human filming to rush in and "save" the underdog creature at seemingly the last second.

These videos are known as "fake animal rescues." They're largely posted on YouTube, which has failed to adequately discourage such abusive content. Even though they're faked, these videos and the filming process puts real pets and wildlife in grave danger — sometimes actually leading to genuine death.

The "perpetrator" animals in these cases are painted out as evil predators that just can't be trusted to do anything other than attack and maim more defenseless critters. Meanwhile, the more defenseless being are left traumatized and shivering at the end — if they're lucky enough to live through the injuries or shock incurred during filming.

YouTube has officially recognized that these fake animal rescue videos are a problem and, in March 2021, said it would start banning such content. But that was months ago, and hundreds remain up on the platform, generating likes and money. For every video that stays up, animals are exploited and harmed. And for every video that garners attention and clicks, wannabe YouTubers are tempted to make their own "copycat" videos.

These YouTube accounts provide zero benefit to the public. There's no reason these videos should be allowed to stay online. It's time for YouTube to get serious about cracking down, now! Sign the petition if you agree.
Sign Petition
SHAREShare With FriendsTWEETEMAILEMBED
Sign Petition
See more petitions:
You have JavaScript disabled. Without it, our site might not function properly.

Care2
People are forcing snakes to nearly kill pets and primates on video, all just to get YouTube "likes"
SHARETWEET