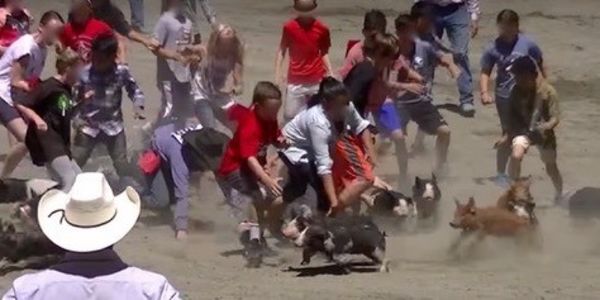 It's ABUSE, not entertainment! Stop the Woodside Pig Scramble

On July 4th, The Mounted Patrol of San Mateo County hosts the Northern California Junior Rodeo in Woodside. In addition to the official line-up of Junior Rodeo events, the Mounted Patrol itself stages an un-sanctioned event called the pig scramble. We are strongly opposed to how this abusive activity treats pigs.

Pigs are prey animals and they suffer from extreme distress as they are chased by dozens of screaming children who mob them, grab and tackle them by the hind legs and torso. The pigs are also treated in inhumane and potentially injurious ways by the adults involved who have been documented tossing pigs onto the ground from the transport trailer, dragging them and carrying them upside down by the legs as they move them about the arena.

Times have changed and this abusive event violates modern farm animal welfare standards and veterinary best practices for the safe, humane handling of farm animals. It also sends a message to children that it is acceptable to harass animals for entertainment. Such abuse is not acceptable and this unsanctioned event has no place in the Town of Woodside - a town that cares deeply about the welfare of its horses and all animals.

If you want to see what takes place during the Woodside Pig Scramble, watch this YouTube video.

Rodeo Sponsors: Gold Sponsor
R.E. Borrmann's Steel Co. (the only sponsor who in the rodeo program says they sponsor the pig scramble.)