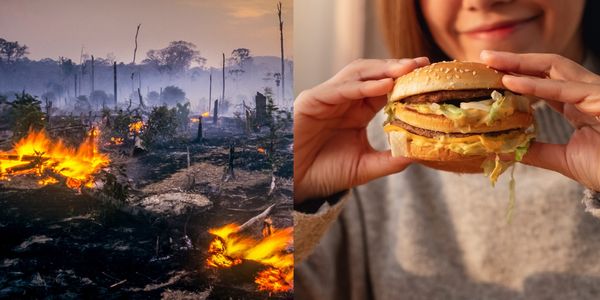 The Amazon Rainforest Could Be Entirely Wiped Out in a Few Decades. A McDonald's Beef Supplier Is Partially Responsible.

The Amazon rainforest is one of the most beloved ecosystems in the entire world, and for good reason. The Amazon serves as a main carbon sink, making it one of the most important natural ways to combat global climate change. It also is home to some 3 million known species, with nearly 500 different mammals calling the forest home and over 1,300 birds living there full time or using it as a vital stopover during migration. But the Amazon is at extremely high risk, with an estimated 200,000 acres burned every single day. The main cause of such unthinkable destruction of a near-universally treasured place? Beef production.

Sign the petition now to tell McDonald's, Goya, Albertsons, and Kroger that they must stop using JBS beef, which primarily sources from Brazil, as a supplier!

Beef production requires lots of land, and deforestation is a quick and easy way for companies trying to make a profit to increase the amount of land they can use for cattle ranching. While many of these companies are located in Brazil, they supply primarily to nations in the West and North. In fact, a new investigation shows that the vast majority of beef produced in deforested Amazon territory ends up getting shipped north to the United States, one of the beef-loving capitals of the world. And that love of beef is causing the Amazon to be devoured before our eyes.

Some of the largest grocers in the country – as well as the single largest fast-food chain in the world – supply their beef primarily from JBS, who is a huge buyer of Brazilian beef. Companies like McDonald's, Goya, Kroger, and Albertsons are all responsible for buying beef from JBS. It is up to these multi-million dollar corporate giants to do the right thing and stop sourcing beef from companies that are quite literally profiting off of the destruction of the Amazon rainforest.

Once the Amazon is gone, we cannot simply bring it back. The ecological consequences of losing one of the largest rainforests in the world are terrifying, and it is quite literally impossible to predict just how many species will go extinct and how much carbon will be released back into the atmosphere if every acre is burned. Sign the petition now to tell McDonald's, Kroger, Goya Foods, and Albertsons to stop using JBS as a supplier!
Sign Petition
SHAREShare With FriendsTWEETEMAILEMBED
Sign Petition
See more petitions:
You have JavaScript disabled. Without it, our site might not function properly.

Care2
The Amazon Rainforest Could Be Entirely Wiped Out in a Few Decades. A McDonald's Beef Supplier Is Partially Responsible.
SHARETWEET