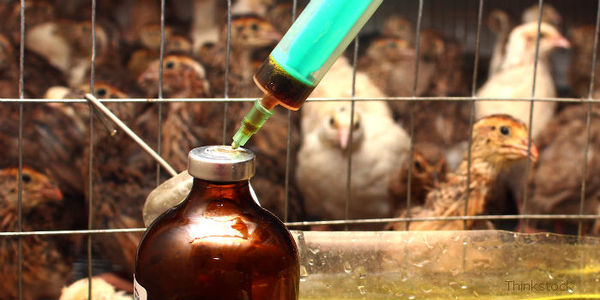 Years before expected, Colistin-resistant bacteria has spread from China to Europe. Colistin is a very important antibiotic because it’s the one doctors turn to when all others fail. The overuse of antibiotics in farming is contributing to this increase in antibiotic-resistant bacteria. Please sign this petition to demand that European Commission, Veterinary Medicines Directorate & Public Health England crack down on overuse of antibiotics in factory farming.

Sir Liam Donaldson, former UK Chief Medical Officer, says: “Every inappropriate use of antibiotic in animals is potentially signing a death warrant for a future patient.” Factory farming relies on an overuse of antibiotics to compensate for its disease-inducing, crowded conditions. The spread of Colistin resistance is very concerning. The DNA that enables Colistin resistance can cross species. It could lead to untreatable infections, and what the British Broadcasting Corporation (BBC) has called the “antibiotic apocalypse”. This “threatens to plunge medicine back into the dark ages". Nevertheless, adds the BBC, UK health officials only intend to “closely monitor” the risk for now. But the Alliance to Save Our Antibiotics said immediate and far-reaching action is required.

Sign this petition to demand an end to overuse of antibiotics in European farming, to slow resistance and prevent what could become an antibiotic apocalypse.

We, the undersigned, agree that more urgent action is needed to prevent what could become an “antibiotic apocalyspe” if  concerns over antibiotic resistance are not taken more seriously.

The Alliance to Save our Antibiotics notes that “In the UK, nearly 45% of all antibiotics are used in farming, mostly used as a pharmaceutical crutch to compensate for disease-inducing conditions of factory farming, where thousands of animals are typically kept crowded together in confined spaces.” And ASA echoes former Chief Medical Officer Sir Liam Donaldson’s concern that:

ASA’s webpage emphasizes that the way antibiotics are being used now is undermining what antibiotics have done in the past to revolutionize medicine’s ability to save millions of lives, because they are now “bought, sold and used with abandon, resulting in the emergence and spread of bacteria which are resistant to these live-saving drugs.”

Most disturbing is the fact that “This is no longer a prediction for the future, but is happening now."

That is why ASA says it is “shining the spotlight on the immense volumes of antibiotics used in intensive livestock farming, and campaigning for urgent action to address these practices.”

According to ASA, it’s call for reform is not unpopular. It cites “A recent survey by Avaaz and TNS” showing that :

62% of Brits are alarmed about the risks of antibiotic resistance. Two thirds think farmers should change their practices so that their animals don’t routinely need antibiotics. And 76% of the Brits think ministers should ensure that farmers only use drugs on sick animals, even if that reduces meat production.

We, the undersigned, do not believe Public Health England’s reaction to simply keep an eye on the public health risks from developing Colistin resistance is adequate. We therefore join ASA in its call for an immediate ban on preventive farm use of all antibiotics important in human medicine.

Thank you for your time and immediate attention to these urgent concerns.