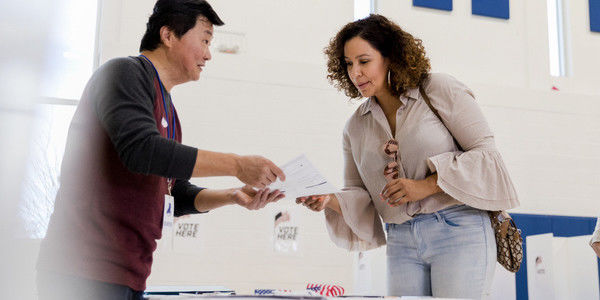 Poll-working is an essential job. Tell these corporations to pay their employees to be poll workers and protect our election!

In a democracy, there's nothing more "essential" than voting — and no task more essential than poll-working to ensure voting machines are working properly and oversee ballot-casting. That's why it's so exciting to learn that Old Navy, a retail clothing store, is planning to pay its staff to become poll workers during the elections in November 2020.

Poll workers, otherwise known as electoral inspectors, are tasked with setting up polling locations, defending the integrity of voting by protecting equipment and ballots, and educating voters about their rights.

If store employees are already being placed in the difficult position of coming back to work during a rapidly-spreading pandemic, they might as well know that their efforts are going towards something truly vital and larger than themselves. We're not trying to suggest that clothing isn't important — but working to safeguard an election that's already being targeted and undermined by Republicans and foreign agents alike is clearly next-level.

Sign the petition to demand that other corporations follow Old Navy's lead! Tell Starbucks, Target, and other major companies to pay their employees to become poll workers.

It's already difficult for many retail employees to get involved in the electoral process since they're often forced to work long hours at minimum wage. On top of that, the U.S. still hasn't declared Election Day a federal holiday yet. So getting time off in order to participate — whether it's via phone-banking, door-to-door canvassing, or even physically casting a ballot on Election Day — is often an impossibility.

As a country, we're also at a crisis moment when it comes to electoral monitoring. We have a shortage of poll workers like we've never seen before, primarily because most electoral inspectors in past years were retired and elderly individuals, who are uniquely at risk of contracting the deadly COVID-19 virus. Adding onto that the constant looming shadow of outside interference by foreign states as well as Donald Trump's completely false allegations of supposedly rampant electoral "fraud" by individual voters (again, a total lie), and we're now in a situation when election inspecting has simply never been more important.

It's incredible to see that Old Navy is helping to address all of these points — retail workers' access to democratic participation, the poll-worker shortage, the need for monitoring — all with a single company-wide policy. It's worth noting that any store employees who take Old Navy up on their paid poll-worker policy will actually be making double the money, because states and localities often pay poll workers out of their own budgets, too!

This is a no-brainer. Our democracy is in a desperate moment, requiring urgent help. And retail sector workers deserve to be given options that show how "essential" they truly are! Not just to their bosses, but to the whole of society.

Tell Starbucks, Target, and other U.S. corporations to pay their workers to take the day off and become poll workers during the November 2020 election!
Sign Petition
SHAREShare this petition with friends!TWEETEMAILEMBED
Sign Petition
See more petitions:
You have JavaScript disabled. Without it, our site might not function properly.

Care2
Poll-working is an essential job. Tell these corporations to pay their employees to be poll workers and protect our election!
SHARETWEET