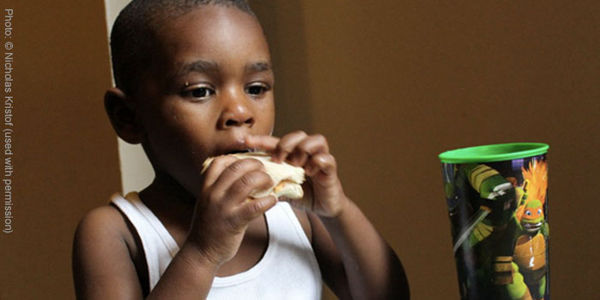 Malachi can't speak. And like thousands of children in Flint, Michigan, Sebring, Ohio, and other US communities, his life appears to have been irrevocably altered by lead poisoning — and government inaction to stop it.

The Baltimore two year-old, whose story was featured in a powerful column by Nick Kristof in The New York Times, is hardly alone:

"Today the continuing poisoning of half a million American children is tolerated partly because the victims often are low-income children of color... When Congress slashed funding for lead programs, it helped poison kids like Malachi — and 50 years from now his capacity will still be constrained because of the failures of Congress."

From Flint to Baltimore, Sebring, Ohio and communities across the country, lead exposure is a public health threat. Lead poisoning can reduce children's IQ. Pregnant women can experience premature births. And all adults are at risk of kidney and reproductive problems.

In 2012, politicians in Washington slashed programs to monitor lead levels in water and protect Americans from lead poisoning by 93 percent. Some support has been restored since then, but the programs still operate with less than half the resources they had just a few years ago.

Be a voice for Malachi and hundreds of thousands of children across America. Sign this urgent petition now to tell your Senators and Member of Congress to support new legislation from Senator Sherrod Brown (D-OH) to protect kids — and adults — from lead poisoning.

As someone who cares about protecting kids from lead poisoning, I strongly urge you to support the forthcoming proposal from Ohio Senator Sherrod Brown that would:

The terrible situation in Flint, Michigan and communities across the country clearly demonstrates the need for programs to protect our communities from lead exposure and the need for clear accountability. As Congress begins to consider the budget, I urge you to do everything in your power to ensure that government programs to prevent lead exposure are appropriately funded.