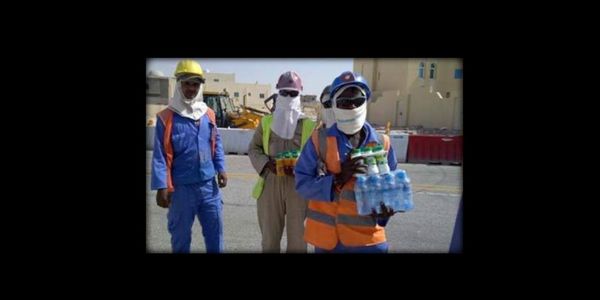 The 2022 World Cup Was Built by Modern Day Slavery. FIFA and Its Partners Should Compensate the Workers Who Built It.

The word "trafficking" gets thrown around a lot, but often not with the nuance it deserves. One form of trafficking that we often overlook is labor trafficking -- a form of modern-day slavery in which people work against their will due to force, fraud, or coercion. This year on World Day Against Trafficking in Persons, we want to bring awareness to a major enabler of labor trafficking: FIFA. In 2010, FIFA awarded the 2022 World Cup tournament bid to Qatar, a country known for its labor trafficking and human rights abuses.

Amnesty International is calling on FIFA to match this $440 million in World Cup prize money and create a compensation program for Qatar's abused migrant workers. Sign the petition to urge FIFA's official World Cup corporate partners, which benefit extensively from the event, to make major contributions to the compensation program!

The 6 countries that make up the Gulf Cooperation Council (GCC) attract millions of migrants seeking higher wages than their native countries, who often find themselves in exploitative situations. This is largely due to the GCC's Kafala system -- a sponsorship scheme that gives private companies and citizens almost total control over migrant workers' employment and immigration status. With migrants making up 50% of the GCC population and 70% of the region's workforce, it's no secret that the region is rife with labor trafficking and human rights abuses. While Qatar claims to have ended the Kafala system in 2016, there are still bureaucratic hurdles that make it difficult for trafficked individuals to leave exploitative employment.

The experience of labor trafficking in the GCC is brutal. Vulnerable, low-income individuals are targeted by recruiters with promises of high wages and an opportunity to create a better life for their families. The reality is starkly different: unsafe or abusive work environments, restrictions on movements or communications, and the looming threat of jail or deportation -- sometimes for no reason at all.

As Agnès Callamard, Amnesty International's Secretary General, has made clear: "By turning a blind eye to foreseeable human rights abuses and failing to stop them, FIFA [has already] indisputably contributed to the widespread abuse of migrant workers involved in World Cup-related projects in Qatar, far beyond the stadiums and official hotels."

Hundreds of thousands of migrant workers have suffered human rights abuses while building the 2022 World Cup stadiums, hotels, transportation, and other infrastructure. There is no taking back the blatant human rights abuses that have already occurred since 2010, but the victims should be paid reparations. FIFA and its partners will make billions of dollars and priceless publicity off of the tournament. The least they can do is finally help compensate the laborers who actually made this year's World Cup events possible.

The World Cup in Qatar has been built on trafficked laborers' backs. Sign the petition to demand FIFA and its World Cup partners to pay reparations to the workers who suffered human rights abuses under Qatar's exploitative labor system!

Care2
The 2022 World Cup Was Built by Modern Day Slavery. FIFA and Its Partners Should Compensate the Workers Who Built It.
SHARETWEET