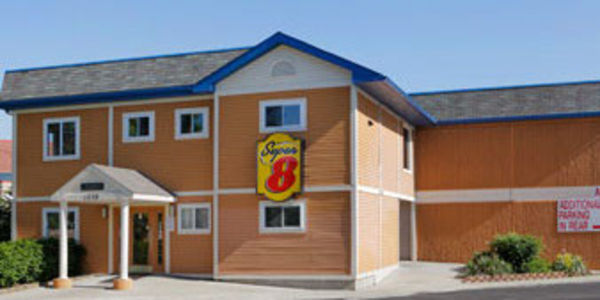 On February 14, @Super8Hotels tweeted, "Love is in the air… Happy Valentine's Day!" But their love certainly didn't extend to homeless families in Ohio.

According to Super 8, enforcing a changeable policy is more important than saving human life.

On Valentine's Day, the temperature in Columbus, OH, was nine degrees with wind chill below zero. George and Joyce Gruss were traveling across the state and stopped for dinner at Wendy's, and saw a couple crying. They asked Stephanie and Louis what was wrong, and Stephanie said they were homeless with nowhere to go. Rather than letting them suffer hypothermia, George and Joyce generously bought them three nights at a Super 8 Motel. But an hour later, the Super 8 called George back just to let him know they were evicting the homeless couple even if it meant letting them freeze - all because they didn't have ID, and by the way, he couldn't have their money back, either.

Super 8 is owned by the Wyndham Hotel Group, which also owns Days Inn, Ramada, Travelodge, Howard Johnson, and more. Tell Wyndham CEO Geoff Ballotti: If you want our travel dollars, then change the way you treat homeless people! Make things right with this couple and set new policies to make sure this never happens again!

Wyndham has since refunded George's money, but still needs to update the way it treats the homeless. After signing, please share this petition widely so that Super 8 hears from as many customers as possible - thank you! As you know, a story has gone viral on social media about a Super 8 location in Columbus, Ohio. The weather was nine degrees, so an Ohio family very generously and compassionately bought three nights at one of your motels for a homeless couple. This is an example all of us should follow when we can afford it - but apparently your chain doesn't think so, because you kicked the couple out for lack of an ID and refused to give a refund to the first family.

Does Super 8 think enforcing changeable motel policies at all costs is more important than protecting human life? That's what it seems like right now.

Businesses are more than profit centers - they are also an important part of local community fabric. Refunding George Gruss's money was a first step, but if you want my travel dollars at any Wyndham Hotel Group locations, you will take two more important actions:

-- Apologize for this franchise's actions, locate the homeless couple, and make things right with them.

-- Most importantly, create new, compassionate policies regarding homeless customers at all Wyndham brands and require that all franchise owners follow these policies. The need for ID is understandable -- of course hotels need to recover any damage customers do to your room, but that is not more important than letting people avoid death from hypothermia. This is especially true when you already have ID and credit card information for the generous person providing the room, as happened in Ohio.

We the undersigned look forward to your response and to seeing new, more compassionate policies come to all Super 8 motels and other Wyndham locations.
Sign Petition
SHAREShare With FriendsTWEETEMAILEMBED
Sign Petition
See more petitions:
You have JavaScript disabled. Without it, our site might not function properly.