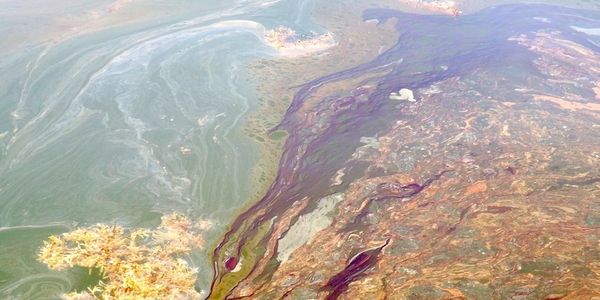 A Major Oil Leak Has Polluted the Gulf of Mexico for Over 11 Years - Hold Taylor Energy Accountable!

In 2004, Hurricane Ivan damaged a group of oil wells just 10 miles off of the coast of Louisiana, triggering a steady, uncontrolled flow of oil into the Gulf of Mexico that has continued for eleven years. It's the longest-running commercial oil spill ever to pollute the Gulf of Mexico - and if nothing is done, experts warn that the leak will continue for another century or more.

Shockingly, there are still no plans to stop the pollution!

For the past decade, Taylor Energy Co., which owns the wells, and the U.S. government, which should be holding them accountable, have been downplaying the extent and environmental impact of the leak - while engaging in secretive deals that the public hasn't been allowed to see.

Ian MacDonald, a Florida State University oceanography professor, warns that the leak "presents a substantial threat to the environment" and is capable of harming birds, fish and other marine life. But last year, when Taylor Energy presented federal officials with plans for a "final resolution" of the spill, they claimed that  the "best course of action ... is to not take any affirmative action".

Shockingly, the U.S. Government appears to agree. While they claim to have ordered additional work from Taylor to stop the leak, there is no evidence showing what - if anything - has been done.

Executives and officials may be able to ignore oil spills, but the people and wildlife of the Gulf don't have that luxury. Just ask Jonathan Henderson, Coastal Resiliency Organizer with the Gulf Restoration Network in New Orleans. In an interview, he said, "I’ve been on the water in the sheen in a boat, and my eyes burned, the fumes were heavy and I became light headed. It’s hard to imagine that wildlife, birds or fish that came into contact with it wouldn’t be affected.”

Taylor Energy and the U.S. Government have shown that they're willing to allow their "dirty little secret" to poison the Gulf for the next 100 years - leaving our grandchildren to clean up the toxic soup.

This isn't just appalling - it's criminal. The Gulf doesn't need bureaucracy, secret deals, or corporate promises. It needs action. Taylor Energy must be held accountable for this leak, and the pollution must be stopped now.

The United States Government has a responsibility to serve, protect, and sustain American communities, natural resources, and the health of our land, water, and air.  That's why I was angered to learn that, for the past 11 years, it has failed in this mission through its lackluster, secretive response to the Taylor Energy oil leak - a slow, but steady, flow of crude into the Gulf of Mexico which began after Hurricane Ivan toppled a drilling platform in 2004. While this leak is nowhere near the size of the massive BP oil spill, scientists warn that it could still be one of the worst pollution events the Gulf has ever seen. Even more frightening is a recent report from the U.S. Department of the Interior, which warns that, if left unchecked, the leak could continue to poison the Gulf for another century or more. This is simply unacceptable. Taylor Energy must be held accountable, and the leak must be stopped as soon as possible.

One of the most disturbing aspects of the response to this spill is the deliberate secrecy surrounding it. Unified Command, the group set up by the U.S. Coast Guard to deal with the spill, has repeatedly refused to answer basic questions about the leak, citing "trade secrets". Local environmental restoration directors, people whose job it is to know about oil pollution, were never notified about the leak, and the Associated Press had to take Unified Command to court just to get access to federal and corporate reports regarding the spill. Out of the 15,000 pages of documents turned over, all but four were deemed "confidential" and heavily redacted. That a branch of the United States Government would deliberately withhold important information about the health of our environment is simply appalling, and must no longer be tolerated. The American public has the right to know what's going on just ten miles off of our shores.

Furthermore, while Taylor Energy claims that the leak is small, reams of data from university scientists, environmental watchdog groups, and observers on the ground tell a much different story. A recent report by the Associated Press reveals that Taylor Energy's federally-mandated data reports on the leak are ludicrously inaccurate. According to Taylor's reports, a 1,170 foot long slick created in 2009 contained the impossibly low figure of only 1.5 gallons of oil. Ian MacDonald, a Florida State University oceanography professor, warns that the leak "presents a substantial threat to the environment" and is capable of harming birds, fish and other marine life. His "conservative" estimate is that Taylor's reports lowball the amount of oil leaking by, on average, "a factor of 100 or more." We cannot afford to stake the health of the Gulf on deceptive data provided by the very corporation which fouled her waters. The decisions we make to remediate the spill must be based on sound science, not corporate propaganda.

Taylor Energy and Unified Command might be able to ignore the daily oil slicks polluting the Gulf of Mexico, but residents and stakeholders who depend on the healthy, intact ecosystems of the Gulf dont have that luxury. They've seen and felt firsthand the negative effects of the Taylor oil leak. In a recent interview, Jonathan Henderson, Coastal Resiliency Organizer with the Gulf Restoration Network in New Orleans, said "I’ve been on the water in the sheen in a boat, and my eyes burned, the fumes were heavy and I became light headed. It’s hard to imagine that wildlife, birds or fish that came into contact with it wouldn’t be affected.” Florida State researcher Oscar Garcia-Pineda, who studies oil emulsions at the Taylor site, was also sickened by the toxic fumes, even though he was wearing a respirator. "It's just amazing how much oil is there," he said.

Given the severe repercussions and sheer size of this leak, Taylor Energy's proposed "final remediation" - to "not take any affirmative action" - is simply unacceptable. While this leak will be difficult to contain due to the sediment burying the wells, there is no evidence showing that Taylor has attempted every possible method to stop the pollution. To accept Taylor's "solution" is to simply walk away from the problem and allow the leak to poison the Gulf for the next 100 years - leaving our grandchildren to clean up the toxic soup. This embarrassing failure to protect the American public must not be tolerated.

We, the undersigned, call for increased remediation efforts for this spill to take place as soon as is feasible, demand greater public transparency as the incident is resolved, and urge the United States Government to hold Taylor Energy legally and financially accountable for the spill and any associated violations of federal and local laws. To do otherwise would be a tragic miscarriage of justice and would suggest that corporations have the ability to pollute our water and land with no repercussions.

The Gulf of Mexico, and the people and wildlife that depend on it, simply cannot afford another decade of inaction - let alone a century. We must not tolerate this oil leak any longer. Taylor Energy must be held accountable, and their pollution must be stopped immediately.

Care2
A Major Oil Leak Has Polluted the Gulf of Mexico for Over 11 Years - Hold Taylor Energy Accountable!
SHARETWEET