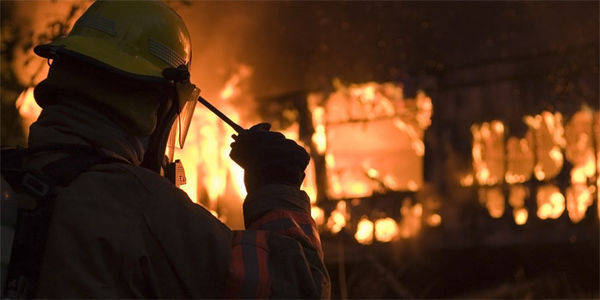 This Company Caused People to Be Burnt to Death, But Still Wants Millions in Bonuses for Its Executives

The wires we all use to connect us to the world and deliver power to our homes is killing us off. The situation seems innocuous at first. Summer comes and the sun warms our communities to ever-hotter temperatures. Then the grasses outside dry and shrivel up. The wind kicks in. And all it takes is for one length of metal rope on a pole to break, or one jumper to spark.

There are two main reasons that the people of Paradise, California last year lost their homes, their belongings, and in the cases of 86 individuals, their lives. One reason, of course, is global warming, which is ramping up the intensity of the fires every year. But the other is a more immediate villain: a greedy, bloated, monopolistic power company that cares nothing about people's lives and everything about raking in profits.

Last year, the Camp Fire became the deadliest fire in the entirety of California history, razing 90% of an entire city and wiping out almost 19,000 buildings — many of them homes. Even now, countless families are still homeless as a result. Investigators immediately suspected California's largest utility company, Pacific Gas & Electric (PG&E) of being the culprit. And while they denied it for months, eventually their responsibility was confirmed.

We might have hoped they would have learned their lesson, but we now know that they didn't. Nearly a year later, the winds whipped up again. Grasses were dry as tinder. And while PG&E took precautions by cutting power for hundreds of thousands of Californians, it didn't bother to think about its equally-dangerous high-voltage lines. Those powerful wires remained fully alive and active — and, like much of PG&E's equipment, severely under-maintained. When a broken (and unfixed) jumper sparked, that's all it took. The resulting Kincade Fire in Sonoma's wine country north of San Francisco has now burnt an area larger than the city of Baltimore.

But, strangely enough, PG&E's corporate leadership seems unbothered. They are solidly responsible for the burnings and death of 86 people from last year, and untold numbers this year. But, as a privately-owned monopoly, they are still reaping in the money. Just this summer, they planned to pay 12 of their corporate big-wigs a full $16 million in bonuses, until a federal bankruptcy judge stopped them. Their new CEO already snatched a $3 million bonus earlier this summer.

This is the same company that has made a business out of cornering the market — while also cutting corners. It is well-documented that PG&E has neglected maintenance and upgrades, thereby making their equipment significantly more dangerous and prone to fire-starting breakages, while blaming others for disasters they create. As a monopoly, they've also made sure to keep their prices high, at the top profit-maximizing level while paying themselves enormous sums.

It's clear that we cannot trust PG&E. With dozens of people dying in terrifying catastrophes that they've created every year, we have to do something now.

There is one good answer: the state of California must turn PG&E into a state-owned public utility. By their very nature, there's no way to make power-generating utility companies competitive. The free market cannot regulate this field. But the state can. By transforming PG&E from a heartless, predatory corporation that bleeds its customers dry and then burns them alive, California lawmakers can deliver not only safer power, but also cheaper power.

Taking control of PG&E would remove the profit incentives that are currently distorting the utility company, and instead re-focus on what's important: providing a necessary good (power and energy) at much more affordable prices for everyday people.

As journalist Ryan Cooper explains, "PG&E is such a disaster that there is essentially no alternative to government stepping in; let it be done in a clear, simple, and fair fashion."

The bottom line is this: People need power. These are much-needed utilities that most people cannot live without. We're not talking about luxury, high-end cars or fancy clothes. Without electricity and gas, patients cannot receive life-saving treatments. Caretakers cannot cook for their families. Workers cannot do their jobs. But people need to receive this power safely, in a way that doesn't risk their lives. Sign the petition to demand that the state of California take action to own PG&E directly!
Sign Petition
SHAREShare With FriendsTWEETEMAILEMBED
Sign Petition
See more petitions:
You have JavaScript disabled. Without it, our site might not function properly.

Care2
This Company Caused People to Be Burnt to Death, But Still Wants Millions in Bonuses for Its Executives
SHARETWEET