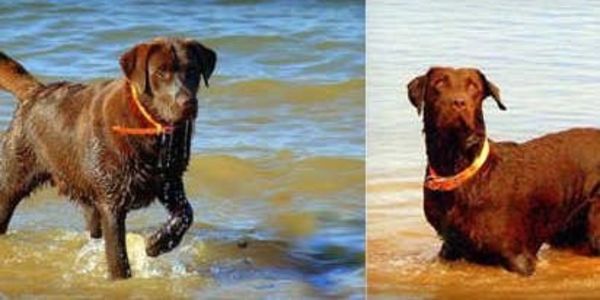 The following is a story from the Monett Times:

An Eagle Rock woman is speaking out on behalf of her family, which is in mourning after their three labradors were allegedly shot to death and mutilated while playing in Table Rock Lake about half a mile from their home.

Dani Johnson, of Eagle Rock, said her two black labs, Gus, 7, and Tug, 11 months, as well as her yellow lab, Kaycee, 3, were shot to death last week, and she is looking for answers.

"We let them out [on March 13] and they didn't come back," she said. "I was up all night calling for them but could not find them. I called the vet office here, and no more than five minutes later, I got a phone call from a person with a really callous voice saying he heard I had called about the dogs. I was happy and thought he'd found them, but the next thing he said was, 'I just called to let you know that your dogs were shot to death and will not be coming home tonight.'"

Johnson said her husband and his brother went to the vet clinic and were directed to the Paradise Cove Camping Resort.

"They went and knocked on the door there but no one answered, so they went to some neighbors and started asking about the dogs," Johnson said. "A nice couple answered and immediately cried, realizing we were their owners. They told us how beautiful, healthy, friendly and happy they were and how much they'd enjoyed watching them play. They were kind people, and they were horrified. The neighbors said they were watching the labs playing in the lake when a lady drove a golf cart down to them and began shooting them.

"She didn't kill them, and the dogs were tortured. They were deliberately doing gut shots, and the people who saw it said they shot Gus repeatedly in his private parts."

Johnson said the witnesses went down to help the dogs, and even in pain, they were licking the witnesses' hands as they died.

"The dogs had been dragged into a pile and all of their collars had been cut off," Johnson said. "My husband and brother-in-law brought them home so we could give them a proper burial."

Johnson said she made a report with the Barry County Sheriff's Office and said she was initially brushed off, told nothing could be done since the dogs were on the shooters' property.

"But, after this social media response, I got a call and a detective wants to come talk to us and file a report," Johnson said Monday afternoon. "Apparently, the people are saying they felt threatened by our dogs and they were going after their cat, but that's ridiculous because they've been around cats before and are kind. Even the UPS driver loves our dogs."

The Barry County Sheriff's Office confirmed there is an active investigation into the allegations.

The post has gained national attention, as evidenced by reviews left for Paradise Cove Camping Resort on websites like google.com, placedigger.com, yelp.com and rvparking.com. Comments have come from as far away as California and Montreal, Canada. Someone has also vandalized one of the business' signs, painting "dog killers" in red lettering.
A couple people have also left positive remarks on google.com, calling the business owners godly people, sharing stories of how the owners had helped them in the past and calling for a stop to the harassment of the owners.

"The response has been amazing," Johnson said. "If I could physically hug everyone who shared the post or left comments supporting us, I would. I want to tell everyone thank you, and I want to use the power of social media to call for more stringent animal cruelty laws.

"Even if you have livestock and a dog comes on your property, most people would shoot in the air to scare it off, not gutshot, torture and mutilate its genitals for the fun of it. There are so many animal lovers out there, and I hope this doesn't happen to any dog ever again.

Two calls for comment were placed to Paradise Cove Camping Resort. The first resulted in a busy signal, and the second rang through, but no one answered.

The following are Excerpts from comments found on Facebook:

My mothers 3 labs were out playing and wandered over to the shore line close to their land, Marsha Perkins shot them all. 10 or more gunshots, they removed their collars and piled them on a hill in the middle of a field. These 3 dogs were very docile house pets and so loved. They had no idea about evil people, and would have trusted anyone, they had only known love. Please share to get the word out about these evil people.

Update on Facebook from Dani Johnson:
This is a heartbreaking update regarding three Labs that went missing a few days ago. I have names, witnesses and proof as a reward to other dog owners

Tuesday morning three of our Labs disappeared. I called the local Vet to report them missing.

Not 5 minutes later I get a call, from a gruff, angry man who said, "I heard you called the vet looking for your dogs. I'm just calling to tell you they're all dead. They were all shot and won't be coming home tonight."

I was shocked, in tears begging for more explanation. Praying it was a cruel joke.

He repeated himself. Same words, even more cruel. We were in shock just heartbroken.

As the day wore on we learned from some kind neighbors who had seen what had happened.

Our babies decided they wanted to go swimming nearby in the lake.

A couple owns property that backs up to the lake,

They spotted our babies from game cameras. The woman went down to the lake on her golf cart and coerced them toward her then she brutally shot them. She shot repeatedly, killing one and sending the other two running for cover in the woods. Those babies suffered and finally died. A kind neighbor witnessed it all. They were in tears and called the local Vet to make certain they weren't suffering.

Shortly afterward I called the Vet to report them missing. He was quite upset and gave me the name of the people and their business. The evil people

My husband and his brother went to his place because they wanted to see with their own eyes if it was our dogs. No one was there. My husband went next door and met a nice couple who both broke out crying when they found out they were our dogs. They said they were the sweetest, gentle dogs. They'd enjoyed watching them play in the water Even later, injured, they were gentle.

When my husband asked if they knew where our dogs were. The man cried and led them to a dirt pile where our babies were thrown. Brutally shot many times. Their orange collars had all been removed.

My husband and his brother, picked up these sweet babies and brought them home.

I called the sheriff and they told me there's nothing they can do.

I hope there's SOMETHING I can do

Please sign this petition to demand justice for Gus, Tug, and Kaycee.