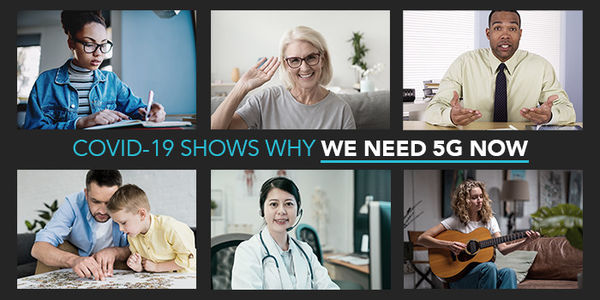 Millions of people are using technology to work, check in with loved ones, do homework, and stay up to date with public health guidelines. The capacity and power of connectivity during this time of uncertainty is truly awe-inspiring.

Americans are pulling together during this time of crisis, and we will get through this together. Spectrum capacity has never been as important as it is right now — and Some in Congress are selfishly throwing up bureaucratic roadblocks in the FCC's bipartisan solutions to bridge the digital divide and better connect America.
read petition letter ▾
SUBJECT: Follow Bold Lead of FCC on L-Band and Unlock 5G

As your constituent, I am asking you to support the FCC decision on Ligado and the L-Band to accelerate 5G.

This issue is common sense — and it's bipartisan with support from a broad swath of people. Leaders across government and industry agree on the critical need for L-Band, recognizing it could cut the time for 5G deployments in the U.S. from a decade to 18 months, generate enormous cost-savings and create jobs.

While some agencies have raised concerns, I am trusting you to make an informed and independent judgement based on the facts, which are plainly laid out in the FCC order. The technical analysis conducted by the FCC's expert spectrum engineers on all of the data submitted to the agency resulted in conditions that will allow much-needed terrestrial deployments in the L-Band without interference to users in nearby bands. Among other things, conditions include:


Unlocking the 5G economy as quickly as possible will be a key element in helping to jumpstart America's economy, creating millions of jobs, generating billions in investment, and enabling a whole new host of economic opportunities brought about through innovation. Mid-band spectrum like the L-Band is key for unleashing 5G. Releasing Ligado's vital spectrum can help accelerate American 5G deployment and all the economic benefits it can bring as the economy recovers. Now more than ever, we must use every tool in our spectrum toolbox to help unleash the 5G economy for American prosperity.

Thank you, [Constituent Name]
Sign Petition
SHAREShare this petition with friends!TWEETEMAILEMBED
Sign Petition
See more petitions:
You have JavaScript disabled. Without it, our site might not function properly.