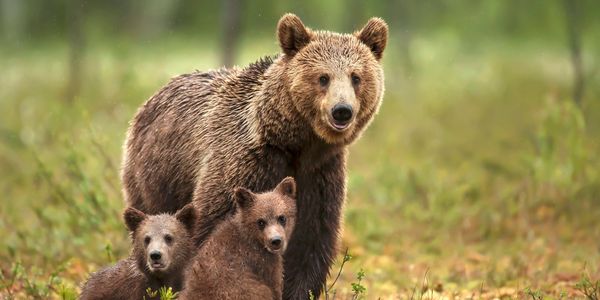 Donald Trump Jr. Has Once Again Paid for the Chance to Kill, and This Time It’s a Treasured Grizzly Bear

In a characteristic move, Donald Trump Jr. just bought the right to hunt an innocent, beloved animal recreationally. Trophy hunting is a cruel and unnecessary sport, the endgame of which is the grotesque collecting and displaying of a murdered animal's body parts, and Don Jr. is looking to add a grizzly bear head to his vast hoard.

Please sign the petition and demand that the Alaska Department of Fish and Game put an end to all grizzly bear hunting!

The grizzly bear, also known as the brown bear in Alaska, is all but extinct in the continental United States at a population of approximately 1,500. By comparison, these iconic animals are thriving in Alaska - their population there numbers just about 30,000. But this does not mean that the grizzly bear is unthreatened. Strict conservation standards are necessary to protect the Alaskan grizzly bears so they do not meet the same fate as their counterparts in the lower 48 states, which were decimated by habitat loss and overhunting.

And yet, the Alaska Department of Fish and Game sees fit to host a horrifying "lottery" in which non-Alaskan residents to enter for the chance to win the right to hunt down and kill these American treasures. The latest American to win such a disgusting honor is Donald Trump Jr.

Don Jr. has a history of using his status and wealth to get what he wants. Unfortunately, what he wants is to take innocent lives. Last year, for example, the world was shocked to learn that Trump's firstborn killed a Mongolian argali, a highly treasured and endangered breed of sheep, and then used his power, influence, and money to retroactively gain a permit to do so.

This time, he won't have to work that hard - this Alaskan lottery system and the murder that ensues is totally legal. This has got to change. Don Jr. thinks he can use his status and image to get away with anything, but we can use those things to draw notice to our cause.

Please, add your voice to the fight for the Alaskan grizzly bear and tell the Alaska Department of Fish and Game to terminate all grizzly bear hunting permits, now and in the future.
Sign Petition
SHAREShare With FriendsTWEETEMAILEMBED
Sign Petition
See more petitions:
You have JavaScript disabled. Without it, our site might not function properly.

Care2
Donald Trump Jr. Has Once Again Paid for the Chance to Kill, and This Time It’s a Treasured Grizzly Bear
SHARETWEET