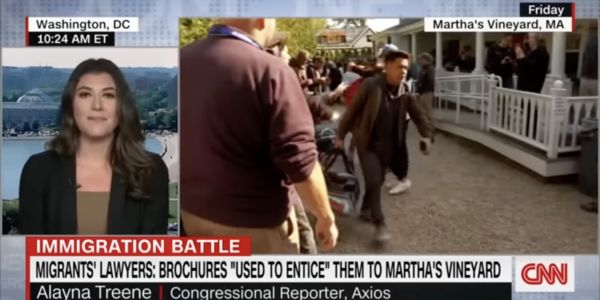 Ron DeSantis Tricked Asylum-Seekers into Boarding a Plane to Martha's Vineyard. The Airline Involved Must Apologize!

In September 2022, Ron DeSantis - the aspiring right-wing leader and racist governor of Florida - hoodwinked dozens of migrants into flying from Florida to Martha's Vineyard in Massachusetts. Out of context, this may sound innocent enough, but the details of the incident are nightmarish.

The migrants had no knowledge they were going to end up on the island. Instead, DeSantis's crew told several people they'd be flown to Boston, where they could obtain expedited work papers. Obviously Governor DeSantis is a villain in this story, and is clearly trying to win some cheap political points off of the cruel punishment of immigrants. But on top of that, what airline would in good conscience agree to take on this job? It turns out the answer is Ultimate Jet.

Sign now to demand Ultimate Jet publicly apologize and donate all profits from this heinous job to the immigrants it displaced!

Under DeSantis's orders, the airline dropped about fifty individuals, believed to be primarily from Venezuela, in Massachusetts with no plan, no knowledge, and no information. The group ended up walking over three miles from the airport to buildings in Edgartown to find basic amenities and information. Can you imagine coming to the United States to seek safety, comfort, and asylum, only to be unknowingly shipped off to a random island and then having to walk many miles simply to find answers?

Some human rights advocates and immigration lawyers are calling the incident human trafficking because of the enticement, deception, and fraud involved. And Ultimate Jet, the company that provided the flight, knowingly took a paycheck to illegally transport people seeking asylum.

Public records show that the state paid a private contractor $615,000 to transport the migrants. It is unclear how much of this money went to Ultimate Jet, but regardless, the corporation should donate every single dollar it earned back to supporting the migrants that they trafficked. This is grossly inhumane treatment of immigrants who already upended their lives to seek safety and comfort in another country.

The least Ultimate Jet can do now is apologize and donate those profits to the legal fees, food, and housing of the migrants it shipped like cargo. Sign the petition now if you agree!
Sign Petition
SHAREShare With FriendsTWEETEMAILEMBED
Sign Petition
See more petitions:
You have JavaScript disabled. Without it, our site might not function properly.