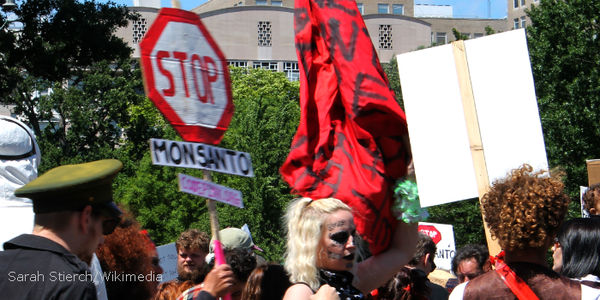 Last year IARC, the World Health Organization’s cancer agency, classified glyphosate as a probable human carcinogen. However, the European Union, with Germany leading the way, is still considering re-approving this poison before its license runs out in June.

According to Greenpeace “IARC is widely respected for its transparency, its rigorous methodology and for the proven independence of its scientific experts.” Nevertheless the European Food Safety Agency (EFSA), with a report prepared by Germany’s Federal Institute for Risk Assessment, attacked IARC’s research and announced there is “no scientific evidence” linking glyphosate to cancer.

While EFSA claims it based it conclusion on a “wider range” of studies, Greenpeace says EFSA refused to release those additional - industry -studies. And just days after EFSA released it’s report, says the Guardian, “96 prominent scientists…fired off a letter" to the EU health commissioner warning that EFSA's research was "not credible."

Despite Germany’s willingness to renew Monsanto’s license for glyphosate, other EU countries are saying not so fast! At an EU meeting last month, Italy, France, Sweden and the Netherlands opposed the 15-year license renewal, according to another Guardian report.

The next EU pesticides committee meeting is scheduled for May 18. Sign this petition to urge Germany to put the health of its citizens first by opposing renewal of Monsanto’s license for glyphosate.

As a former student of epidemiology and one who has researched the harmful effects of pesticides for decades, I am well aware of how industry designs, conducts and analyzes studies in a way that downplays the risks of harm. Therefore I am writing to urge German authorities to stop ignoring the independent and reliable research that links glyphosate to cancer and support the growing ban on use of glyphosate and similar poisons.

Based on numerous reports and public opinion, attacks by Germany’s Institute for Risk Assessment against IARC’s research are unfounded. ARC2020 says that a report by Pesticide Action Network shows that German authorities “didn´t even take note of many scientific studies that have shown toxic effects of glyphosate.”

Clearly Germany, a major producer of pesticides, has economic interests in choosing to believe industry-based vs. independent research, but these interests are not in the best interests of its citizens nor are they cost-effective long-term, at least not for people of Germany whose taxes are paying for health care costs.

ARC2020 points out the “general problem of pesticide risk assessment in the EU” as being “based mainly on unpublished studies that have been conducted or instructed by pesticide producers. It has been shown that these industry studies and their interpretation mask negative effects of glyphosate through untrustworthy statistical methods and questionable arguments.“

Furthermore, according to Greenpeace, Hamburg, Germany, among other European cities, has already banned the use of glyphosate in public places, and several major retailers have stopped selling it, including DIY shops in Germany. These actions support EurActiv’s report of a survey showing “64% of the combined population of the five largest member states is in favour of an EU ban on glyphosate,“ with 70% in favor of the ban in Germany.

New studies showing that glyphosate can enter the body through food and water and that the “majority of Germans have been contaminated by the compound,“ (EurActiv Germany reports ) are just more reasons for Germany to oppose renewing Monsanto’s license for glyphosate.

Therefore I, the undersigned, strongly urge your office and all government officials to oppose the renewal of glyphosate.