Raising My Son To Be A Feminist 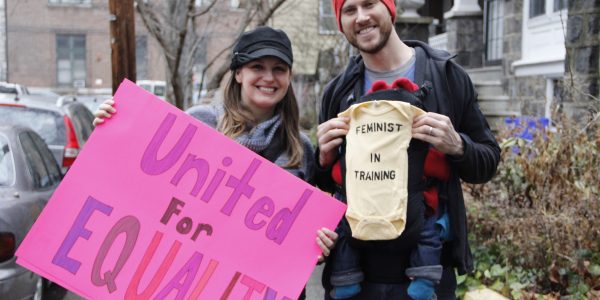 When I first found out I was pregnant, I was sure I was going to have a girl. I couldn’t wait to raise her to be a strong woman, to speak out for herself and others, and to challenge gender stereotypes. But then on October 25, 2016 at 9:43 pm, after 44 hours of labor, out came Finn Asher. I was overjoyed, but what was I going to do with a boy?!

Well, for starters, he was going to go with us to vote for the first woman president. My husband and I were so excited that our son, born under our first black president, would know a woman president for the first years of his life. We were so proud that at a week old he would be a part of history.

And then November 8th happened.

The election of Donald Trump was a gut punch for so many of us for so many reasons. As a brand new parent still overwhelmed by things like figuring out how to dress my child to go outside, I found myself devastated on a whole new level.

My child is white. He is male. Both of his parents have advanced degrees. He will never have to worry about money. He is surrounded by a loving family. He is and always will be privileged. So how, in a country that elected a man like Trump, do I raise my privileged son to be the type of person to recognize and speak out against injustices of all kinds? How do I ensure that he always treats all people with respect, especially those who are different from him? How do I ensure that my son never looks to our current president as a role model?

With a big nod to those who have been doing this parenting thing for a whole lot longer than I have, here are some of the things I have done to help ensure that my son joins the resistance and never ever goes over to the dark side.

Already raising my son to be a feminist and an activist has made me a better person. And I’m just getting started. What are some of the things you are doing to raise children of the resistance?