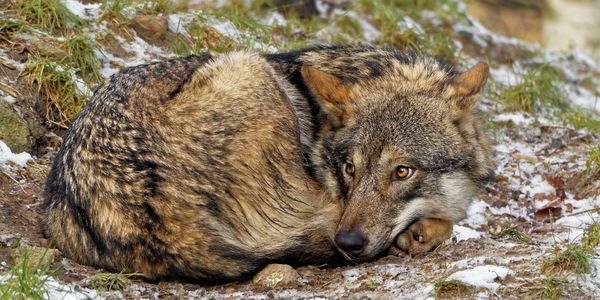 Someone shot and killed the last reproducing female of this legendary wolfpack!

The Wedge Wolfpack was a small but mighty family. This pack of wolves roamed in Washington State, near its border with Canada, and survived against all the odds. They have been murdered by government agencies and poachers, and suffered habitat loss for years, but they have persisted and upheld their iconic role in North America. But in June of 2021, an unknown poacher slaughtered their last remaining mama wolf, the only surviving reproducing female, thus dooming the entire pack to slowly become extinct.

Poachers have recently become emboldened to kill wolves in the U.S. because wolves were stripped of endangered species status and protections in November of 2020. That's why we're asking the U.S. Fish and Wildlife Service to relist gray wolves under the Endangered Species Act! Sign the petition and join the fight.

In 2012, the Washington Fish and Wildlife Service (WFWS) murdered the entire Wedge Pack, six innocent wolves, in cold blood, citing their reason as wanting to protect livestock -- even though studies show that killing wolves can increase the likelihood of the remaining ones preying on farm animals. But the area was soon repopulated with wolves, and the Wedge Pack was reborn. Then, in August of 2020, WFWS once again used protecting cows destined for slaughter as an excuse to kill the last three remaining Wedge Pack adults.

It is quite likely that two of these wolves had pups before they were slaughtered, and the reemergence of a pack in the Wedge's territory all but confirms it. This new Wedge Pack was just two wolves, but they were thriving. Biologists learned this year, 2021, that the female of the pair had likely given birth to pups. But the heartbreaking part is that they found this out when they were examining the mama wolf's cold, dead body. They think that if she had given birth, it was recently enough that her pups would not yet be able to fend for themselves.

A poacher had illegally killed the last remaining Wedge Pack wolf mother, leaving her gunshot-ridden body and possibly poor babies behind. Even though gray wolves are no longer federally protected, "they remain protected under state law in Washington."

Their species has been hunted to near extinction in the United States, and when they lost their protected status in November of 2020, their numbers were nowhere near stable. There are fewer than 200 gray wolves remaining in Washington State. And even though hunting them is illegal in the state, "months of expanded and legalized wolf-killing across the country" has normalized this horrific act of animal and ecological violence.

The wolf's role in North America's ecology is key -- they keep prey populations like deer in check while redistributing nutrients through hunting and movement patterns. Plus, they provide some of the only sources of food for scavengers that do not or cannot hunt. It's impossible to know the extent of the web of life that originates with wolves, but one thing is for sure -- we need them. But until they are once again relisted as endangered and protected, we are at risk of losing them forever.

Sign the petition asking that the U.S. Fish and Wildlife Service do the right thing, and add the gray wolf back to the Endangered Species Act!

Care2
Someone shot and killed the last reproducing female of this legendary wolfpack!
TEILENTWEET