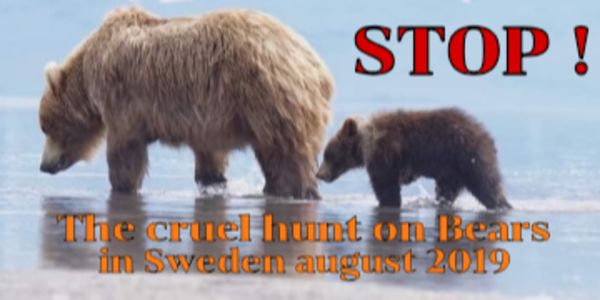 Stop The Cruel Trophy Hunt For Bears In Sweden 2019!

Trophy hunting is unethical and immoral and should be banned.

Hunting is the biggest threat to the most peaceful of all bears — the Scandinavian brown bear, and the Artdatabank (Database of species) has assessed the bear as "near to extinction".

The brown bear should be highly protected by the Art- and habitats directive and EU-law. But Sweden has developed into a trophy hunting playground and the authorities fabricate loop holes to ignore the conservation status and the emotional capacities of these iconic sentient animals! The Swedish Environmental Protection Agency authorize regional Swedish county administrative boards to grant licence for local trophy hunting and the killing of more than 300 peaceful bears - again!

Last years trophy hunt caused more than 300 bears a gruesome death. Lactating females and cubs weighing as little as 18 kg where killed against regulations, as well as reports of improper feeding stations. These wicked and careless deeds are not punished enough when hunters are authorized to gun down and "bag" another 300 bears in trophy hunt as from 21st of August 2019. Bears are lured to feeding places, cruelly culled and executed when they try to flee or save themselves by climbing trees. Semi-automatic weapons are permitted and specialized predator dogs, "killer dogs", are used to track the non-violent bears who are extremely sensitive to stress and overheating. All is openly legalized as trophy hunting as well as the instructions from the county boards how to obtain an exemption from CITES (the ban on trade with endangered species) and for foreign hunters to export their trophy! The licenced hunts in Sweden has deteriorated severely since 2010 into trophy hunting, that attract predator hunters from all over the country as well as from abroad (often the same who hunt wolves and lynx).

The hunting events are privately commercialized for big sums of money. This is a severe contradiction to what the Swedish Environmental Protection Agency states on its website: "that the world must cooperate to stop the ongoing eradication of species". The hunting lobby can constantly influence politicians and the Swedish Hunter's Association promotes Sweden as "the most liberal country for hunting".

The bear reproduces slowly and has low mobility which further increases the risk of genetic depletion. Reindeer owners accuse bears and lynx of killing their stock but The Predator database (Rovbase) states that only 6 reindeer were killed by bear in 2017! Lynx was accused of taking 10-15,000 reindeer per year but the reality showed a different number – only 187 reindeer was taken by lynx. Almost 100 Lynx are also killed every year in cruel trophy hunts. The Swedish government attributes major economic compensations to reindeer owners for NOT killing predators, so called "predator occurrence on their land" and they also get an additional compensation if reindeer are taken. Demonizing predators enables the trophy hunt.

The cruel hunt is taking place at a critical time of the year for all the bears, during hyperphagia, when they must store fat reserves before hibernation, which is conditional for reproduction as mother bears give birth in their dens and must obtain large reserves of energy in order to sustain the cubs. Bears depend on daylight to find autumn berries as their main food but must change their movement patterns due to the disturbance of hunters and dogs, and cannot search for food in daylight as well as having to change important resting places. Hunting creates a disturbance that differs from other human activities, because it takes place over larger and more inaccessible areas, where the presence of people and dogs is otherwise uncommon. Not only the bears themselves will be killed, but the collateral damage on other individuals, including the bear's present cubs and pregnant females with cubs who may be born this winter. The behavioral effect of hunting on the bears' dynamics remain unexplored and the Swedish Environmental Protection Agency gives no consideration into this, not even when last year's forest fires hit Sweden.

Trophy hunting is no longer sociably acceptable and Sweden must abandon these barbaric blood sports.Killing predators is demoralizing for all of us who defend the Planets' fauna and it is a crime against Nature's voiceless Animals. We must build pathways of Compassion and Coexistence before it's too late and not continue to damage the Earth's ecosystems by killing it's top predators! JAKTKRITIKERNA, the Association Critics of Hunting in Sweden, is calling for a ban on all hunts with culling dogs and a total ban for all bear hunting.

JAKTKRITIKERNA, the Association Critics of Hunting in Sweden, appeals to everyone to sign and help us to inform the Government about the protest against the Swedish Environmental Protection Agency and the County Administrative Board's decision on bear hunting!